How to Destroy an Online Community

While we wait for photos and videos of Cupcake Smackdown 2.0 to be processed, let's jump into some deep thoughts about online communities.

Note: This article is not a reflection of the current or past Yelp Austin Community Manager.

The Community Rocks!
One controversial website that did a stunning job of growing their local communities is Yelp.com.  Through meet-ups, parties, complimentary drinks and food, promoting active members, rewarding engagement on the website, Yelp Austin had a core group of fans.  These fans spent time with each other regularly by forming book clubs, knitting clubs, dinner groups, scavenger hunts, bar crawls, and even birthday parties outside of Yelp's direction.  Acronyms for these get-togethers were called "UYE" (unofficial Yelp event) or "DYL" (destroy your liver).  Active Yelpers were also rewarded with a Elite badge on their profile and monthly private parties.  This badge was usually granted after a user had showed active engagement in the website and had profiles depicting their true names and photos (not anonymous).  The users typically had an decent number of reviews, participation in the talk threads, and showed their face as events.

Changing the Social Rules of Elite

Though I don't always agree with Yelp's sometimes policies (I abide by them anyways), I was always impressed with their ability to build a community of extremely loyal fans.  Outsiders described them as cult-like.  When someone describes your community as cult-like, you know you've done a good job cultivating those cheerleaders.  Over the last 10 months or so, all that started to change.  Yelp started bringing on more and more Elite members, who oddly weren't very active at all.  Some of them had only written a handful of mediocre reviews.  Some had never participated in a talk thread.  Some of the reviews aren't even written coherently.  At parties, they seemed to have the "I just got this email invite, but I'm not really sure why." vibe.  It seemed like Yelp was just pumping the numbers.  The monthly Elite parties became less and less about community bonding.  The number of those reviews written about the Elite parties fell along with the ratings of such parties.  Yelp's shiny luster was becoming to fade.

Then came the law suits, and a change in policy.  Business owners were no longer allowed to be Elite members because they would be biased in their reviews.  The website actually reads. "If you are a business owner or affiliated with a local business (spouse, general manager, partner, etc.), we unfortunately can't invite you to join the ranks of the Elite because it presents a conflict of interest."  That cuts out almost all of Austin's population and ALL the members of Blackstar Co-op, an Austin based member-owner brewpub.  This would probably disqualify all REI members as there are two REI stores in Austin.  It also assumes that business owners cannot be unbiased, and that people who aren't closely affiliated with a business are never biased.  These assumptions are pretty illogical and ridiculous.

This policy only makes sense if I was the owner of a store that constantly reviewed my competitors.  However, business owners are consumers of many other industries.  Surely, the community thought that this silly rule would just be another one of those terms of service things that are never enforced.  After all, Yelp is fairly inconsistent and arbitrary on which rules they feel like enforcing and which ones they don't.

~Users' accounts can and have been deleted for posting URLs, though this is not specified in the terms of service.  Yelp wants your free content, but it doesn't want traffic leaving.

~A very nice woman's account was deleted because someone flagged her thread and message as spam when it was obviously not her intentions.  She was a pet sitter who sent a message to her friends with a warning about a dog toy.  Emails to Yelp Administrator at Head Quarters (HQ) located in San Francisco in protest did not bring her account back from the grave.

~Yelp has yet to delete accounts of users who have caused great disruption in the community.  There are several users (anonymous yet vocal ones) in Austin Yelp with the goal of creating anger and hate in the community.  That user spends hours upon hours upon hours writing posts on the talk threads every single day, yet claims that he/she doesn't care about Yelp.  That particular user has been reported to Yelp HQ many times (also reprimanded by Yelp HQ), yet the account remains.  I guess you don't have to be "cool" to keep your account as specified.  You can be a completely insane jerk.  Many users have stopped spending time on Yelp because of this particular user.  Hey, Yelp! Mind taking care of the village belligerent fool?

~Some unscrupulous business owners do make fake accounts in which they review themselves and their competitors.  One business has been writing themselves fake reviews and giving competitors shill reviews.  They have been caught so many times that they decided to accuse other people of doing it their specials box. see below.  Yelpers weren't naive enough to fall for their dirty tricks, but Yelp HQ hasn't stopped this particular business from repeatedly engaging in that prohibited behavior.  You'd think Yelp HQ would be smart enough to log IP addresses. 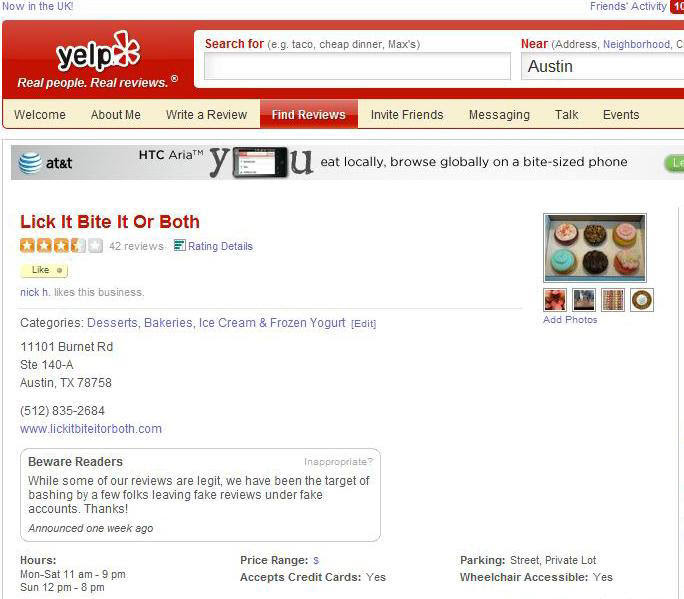 These issues have severely impacted the quality of the Yelp Austin community.  However, something that happened made me realize that the community was on its way down the tubes.

You might know her as @Foodiethenew40.  You might know her as Michelle Cheng, attorney at law.  You might also know her as Michelle C. Super Yelper.  Michelle C. is the Queen of Yelp.  She was there from the beginning contributing 584 reviews to date along with 104 fans.  Her views are consistently fair, entertaining, accurate, and extremely well-written.  That's probably because not only is she an awesome writer; she's also an awesome cook with an educated palate.  In my conversations with casual Yelp readers or businesses owners, I consistently hear the same comments about a certain user.  They go something like: "Who is that Michelle C. girl? She's cool."  It is amazing that Michelle C., but not at all surprising, could impact people who don't have a Yelp account.  She is Yelp Austin's star user, hands down. 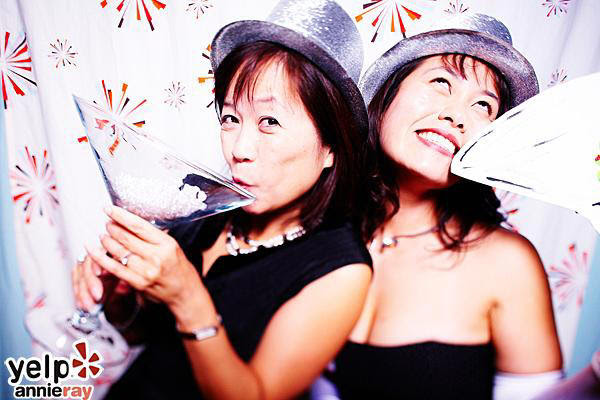 Michelle's on the left.  I'm on the right.

Unfortunately, Yelp HQ decided that since Michelle was a partner at her practice, she no longer deserved the little red Elite badge next to her name.  That's right.  They de-Elited her.  Four years of Elite designation gets nothing now because Michelle is also awesome in her professional life.  They also removed the Elite badge from Robin S., Rick G. and Steve B.  Yelp just screwed with their own social rules.  Instead of rewarding active and engaging users, Yelp started handing out Elite badges to less active users thus diluting the meaning of the badge.  They also took Elite badges away from star users simply because were business owners.  These business owners have never, ever abused the Yelp system.  Yelp decided to that they were guilty anyways.

Some might argue that the Elite badge is meaningless and only gains one access to a free monthly party.  I disagree.  The Elite badge is a social designation and social reward, much more valuable that free food and drinks.  Even if it didn't come with a free party, badges in online communities are meaningful.  I even have four different badges (called garages) in my efficient driving community that gains me nothing tangible.  Yelp was tremendously more successful than their competitors on the community front, and now that just isn't true anymore.  Thanks, Yelp HQ.  Thanks for slapping the wrist of your best cheerleader and turning your back on the community.  Have fun with the law suits and your sparring match with the big Google machine. 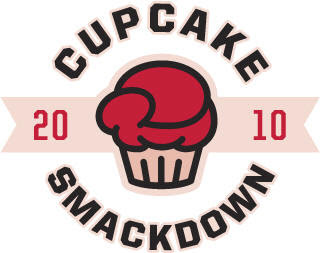 It is true.  Cupcake Smackdown 2.0 is in full swing, and the details are finalized. You and your family are invited to attend Cupcake Smackdown 2.0.  Activities will include:
Admission to the event is free.  Donations for the activities suggested (cash please).  Proceeds from Cupcake Smackdown 2.0 will benefit Lights, Camera, Help, Mobile Loaves and Fishes, and Keep Austin Dog Friendly.
Hashtag: #CupcakeRiot
Webaddress: www.cupcakesmackdown.com
FaceBook: http://www.facebook.com/home.php#!/event.php?eid=108137959240524
Tweetvite: http://tweetvite.com/event/cupcakesmackdown
Date: Saturday, August 21, 2010
Time: 11 am - 3 pm.  Schedule Follows.
11: 30 am & 1:30pm – Attempt to break Guinness World Record for Most Jaffa Cakes Eaten in One Minute (2 rounds) at LCB
11:30 am until 12 noon – Check-in and set-up for Most People Simultaneously Frosting a Cupcake at LCB. Please arrive at this time to participate.
12 noon – Setting World Record for Most People Simultaneously Frosting a Cupcake at LCB.
12:30 pm to 3 pm – Cupcake Cannon and Cupcake Piñata at The Westin’s North Parking Lot
Location: Le Cordon Bleu, 3110 Esperanza Crossing Suite 100 and The Westin, 11301 Domain Drive.  Both venues are across the street from each other.
Venue details: Vendors and activities located the Le Cordon Bleu will be held indoors.  The Cupcake Cannon and Pinata will be held outdoors at the Westin.  There will be ample parking in the street, The Westin parking lot, the Le Cordon Bleu parking lot, and the parking lot behind the Westin.  When parking in the lot adjacent next to the LCB building, only park in spots marked LCB.
Vendors: Cupcake vendors will be selling cupcakes at Le Cordon Bleu.  Gluten-free cupcakes and vegan cupcakes will be available.  Keep in mind that in order to use the cupcake cannon, you'll have to get your hands on some cupcakes.  Cupcake Smackdown 2.0 tee-shirts will be available for $10 each.  Please bring cash for the vendors and activities.  Full list of vendors are:
Other details:  While we love puppies and other cuddly creatures, the August heat might make the day uncomfortable for your pet.  Please give your pet a hug before you leave them at home.  Also, please wear sun block and drink plenty of water before you arrive.  This is a Cupcake fest, not a Lobster Fest.
Let's Give some love to our Sponsors and Partners (Twitter list here): 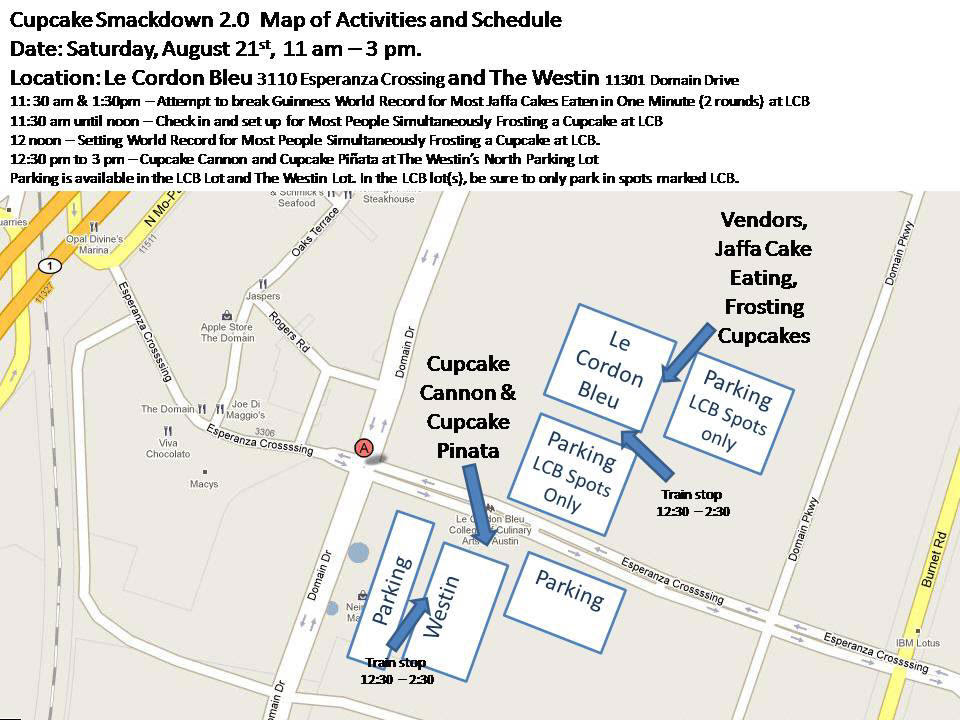