It is the Tuesday after the Austin Food and Wine Festival, and it was a pretty amazing weekend.  I'm still sailing by on the endorphin and adrenaline rushes facilitated by the camaraderie of the Austin food community and newly forged friendships with chefs and food lovers from other cities. While that is over, tonight is still a very special for another local chef, Angela Majko.  Angela is a sushi chef at Uchiko, and she'll be on CHOPPED tonight!  If you're available, swing by the viewing party at Draught House, 9:00 pm tonight, Tuesday, April 30th, 2013.   Food trailer Oyama by alumni of Uchiko will be on site serving Japanese/Mexican fusion cuisine.  The episode will be projected on a big screen and Chef Majko will be in attendance. Draught House is located at 4115 Medical Parkway, Austin, TX 78756.

Below are some fun panorama photos from this past week.  More blog posts to follow.

My view as a #CityWide86d judge at Uchiko Austin.  I felt like a zoo animal.  Everyone kept watching me and taking photos of my plate.  Chef Jeremy is to my right.

This was my view at the start of the Taste of Texas evening event of the Austin Food and Wine Festival.

The grills at the Tim Love meaty love event.  It really isn't called meaty love, but I like the name.

The growing crowd waiting to come into Chef Paul Qui's demonstration at the Austin Food and Wine Festival.
Posted by PookieSoup at 11:09 AM No comments:

Last night was Austin Food and Wine Alliance's LIVE FIRE!  I'm just going to say that pictures are worth 1000 words.

Dai Due Tacos in the front

Meat in the back

Tacos in the front of El Chile

Meat in the back at Mulberry

Aaron in the front of Franklin's

The yolks were amazing!

Firestone and Robertson from Fort Worth

The tops were made with shoe leather scraps

Dessert from Trace
Posted by PookieSoup at 8:26 AM No comments:

Make your Own Wine or Beer Sling for Festivals

I'm a self-proclaimed food festival veteran now.  After attending food events day in and day out, I've learned a few things that I'd like to share.

1. Wear comfortable shoes.
2. Bring a portable charger for your phone or other electronic equipment.
3. Sunblock.
4. Baby wipes.
5. Bring your own silverware.  Most people know by now that I carry a set of chopsticks, fork, and spoon on my persons.
6. Sunblock, yes, again. 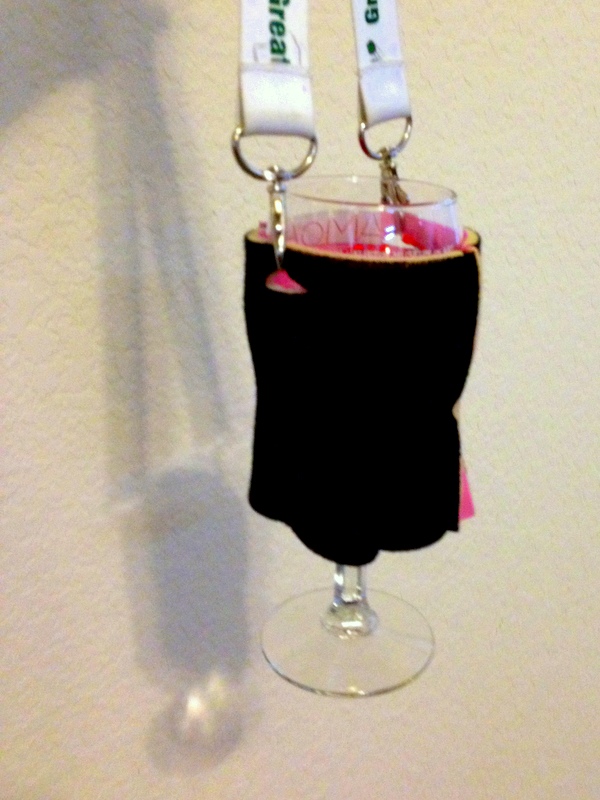 My Wine Sling.  Or Beer Holder.  The name is not important.

Another big design issue at festivals is that most human have two hands.  When you add a plate, glass, and silverware (not to mention camera), your hands get a little full.  Humans would be more efficient if we had several extra hands.

An item that can alleviate is the glass sling, appropriate for beer or wine events.  I already have a smaller beer sling for the Great American Beer Festival, but I didn't have a larger one for LIVE FIRE or the Austin Food and Wine Festival this weekend.  Here's instructions on how to make one in less than 30 seconds with items you probably have in your house.


Tools:
1. Koozie.  Any kind.  I have dozens of these left over from previous events.
2. A lanyard.  The kind with two clips are more stable, however, a single connection point is fine as well. I had tons of these from previous festivals and conferences.
3. Sharp scissors. 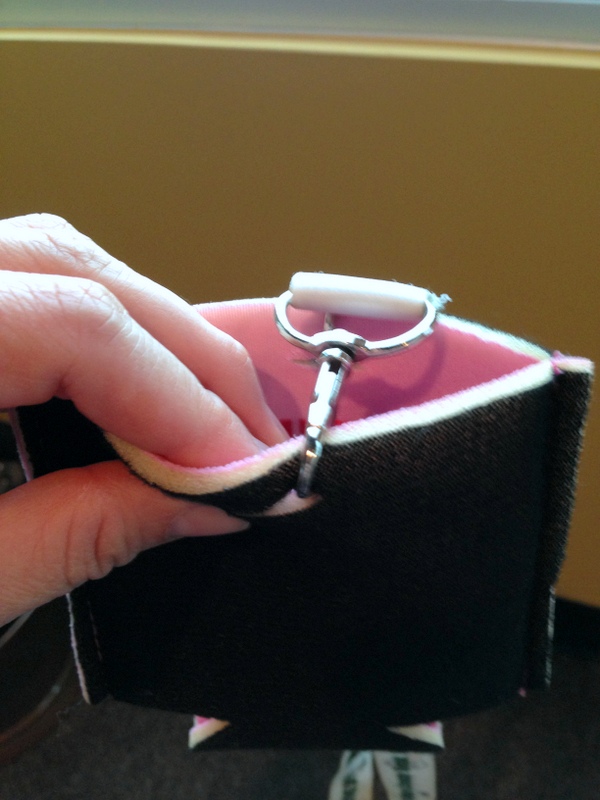 Instructions:
1. Flatten out the koozie so that it is fairly flat.
2. Use scissors to cut a slit about 3/4 to 1 inch from the top end of the koozie on one side.  If you have a laynard with two clips (two connection points), repeat this process on the other side.
3. Pop open your koozie, and attach the lanyard by clipping or threading through the slits.
4. Insert wine or beer glass. TADA! 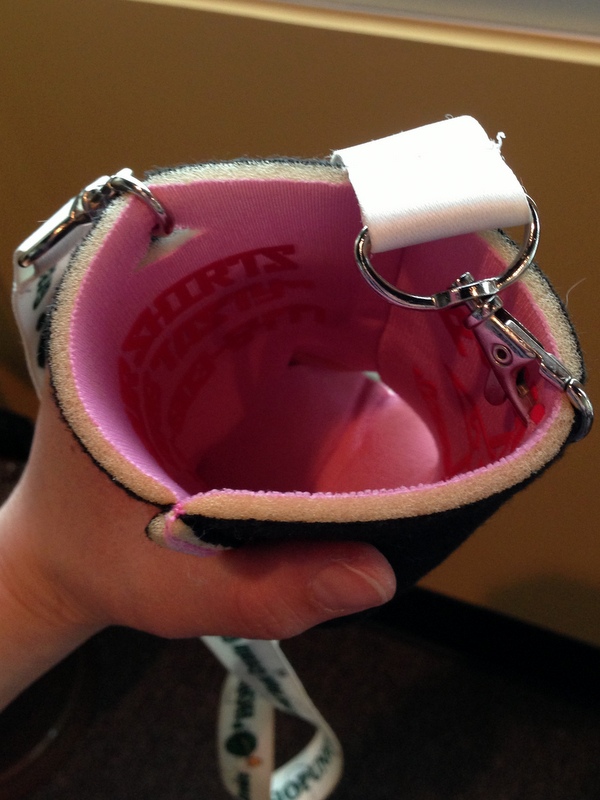 *If you dislike the look of your koozie (the one in this picture was ugly), turn it inside out.

*For more stability with wine glasses, pull the stem through the bottom of the koozie.  Standard koozie sizes fit most wine glasses fairly snug.  It would take quite a bit of force for your wine glass to fall out the bottom.
Posted by PookieSoup at 10:11 AM 1 comment:

It is hard to believe that we're just a few days away from the Austin Food and Wine Festival.  It is obvious that the food scene in Austin has changed very much in the last decade.  Just a few decades ago, there were just a handful of places that you could call a dining experience, and a variety of experiences if you will.

I'm not sure what came first, the demand or the supply.  It seems that in a matter of a few years, consumers in Austin changed or they were more vocal.  A larger collective voice of consumers who were interested in where their food was sourced, how creative new cooking techniques were being used in restaurants, and how the dining experience should be grew.  It was vocalized and realized of demand for more farmers markets, beats in publications, blogs, and food related organizations.

The photos on this post are a blast from the past.  Now that the food landscape (no pun intended) in Austin has dramatically changed into something much more diverse, creative, authentic, and sophisticated, it is time to look back at where Austin previously.  The upcoming festival has morphed into something different over the last few years.

There's the sexy Sandra Spalding of Twin Liquors strutting her stuff at the 2011 Star Power.

From the Austin Food and Wine Alliance:
"After 26 years as the The Texas Hill Country Wine and Food Festival, held in Austin each spring and considered one of the premier epicurean celebrations in the Southern United States, we’ve now become the Austin Food & Wine Alliance, a non-profit organization dedicated to fostering awareness and innovation in the Central Texas food, wine and spirits community through grants, educational programming and events.
The Alliance is the non-profit partner of the new Austin FOOD & WINE Festival in Austin, Texas. As the beneficiaries of the new festival, we’re excited to further support the amazing food and wine talent and happenings in Central Texas and with our new non-profit status, will be able to give back to the culinary community through a vibrant grant program to fund projects focused on culinary innovation."
While there two separate organizations hosting spring time food and wine events in Texas, it only goes to show that Austin's food scene is still changing.  Where Austin will be in 10 years is up in the air, but for now, enjoy the upcoming events.

Chef Philly looking intense with the plating.
Before we kick off the weekend, the Austin Food and Wine Alliance has a great event called LIVE FIRE!  I attended this event in 2011, the first time it was held and the last year it was officially known as The Texas Hill Country Wine and Food Festival.  This was the event that sealed my long-term marriage to Franklin BBQ.  I'm still loyal to the Franklin's.

The dessert by Philip Speer of Uchiko was Kaffir Lime, Avocado, Honeydew, and Cucumber at the 2011 Star Power Dinner.
Posted by PookieSoup at 6:54 AM No comments: