This year's Great American Beer Festival was substantially shorter than my previous GABF trips, but I had a ton of fun crammed into 14 hours.  My flight was not terribly eventful (though not perfectly smooth).  I had the luxury of sitting next to two men going on a hunting trip.  One of the men is a dentist, so my in-flight napping dreams were about dental surgeries, blowing things up, and shooting wild game.  It was actually quite educational.  I now know all the ways in which to kill a feral hog.

A came away from GABF with a few themes this year.  1. Food is important.  On many fronts, the food was vastly improved over previous years.  2.  New beer styles and breweries should be embraced. 3. Growth is a double edged sword.  With growth, there will be growing pains.  I'll talk about these themes throughout my 2012 GABF posts.

Lunch started with a very special brew called Paparazzi Pale brewed by our very own Julia Herz.  It was a bubbly wet hopped (freshly picked at that!) delight.  Camaraderie is a reoccurring theme in the beer industry.  Everyone is AWEsome.  Getting to taste some of Julia Herz's brew was an awesome experience, yet another thing that we could all share.

I'll take a moment to touch on something that is really important in all communities that are scaling.  Curating a community is important.  Very important.  Over the last few years, the beer community and attendance at GABF has exploded.  The numbers presented at the media lunch was 44.7% of GABF ticket sales were to Colorado residents.  55.3% of GABF tickets were sold to out-of-state visitors!  Word is that the tickets sold out in about 45 minutes.  That's amazing.  It is amazing that demand and interest has grown like weeds in my garden, but I do caution that this growth must be curated carefully.

Growing pains is a common issues for many organizations and communities.  With larger numbers comes more noise and more variance.  I likely sound like a stats nerd now, and I admit that I am.  A concern that many long-time craft beer enthusiasts have is the introduction of not so awesome attitudes into the community.  How one decides to deal with less than awesome is a personal choice.  You might think that not everyone has to drink to kool-aid, but I really like the craft beer kool-aid.  It is the kool-aid of supportiveness, bonding, and desire for high quality beers. 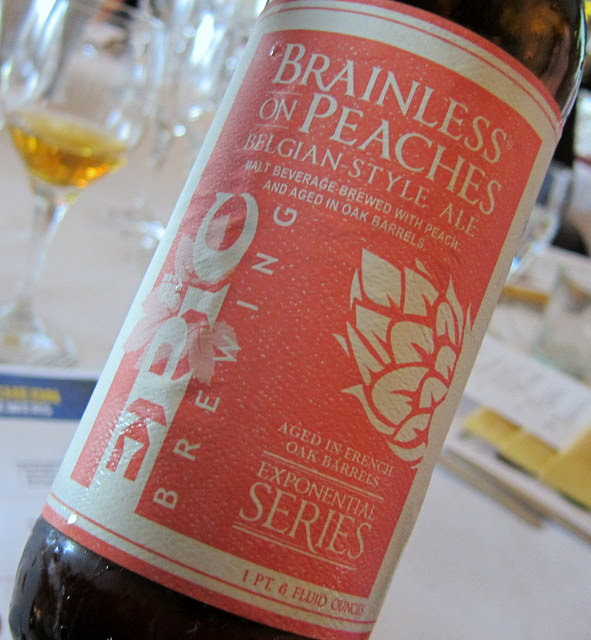 The second welcome beer was the Brainless on Peaches by @EpicBrewing.  It was a very, very lovely aromatic beer that finished dry.  Here's theme two: embracing less middle of the road beers.  Peach beers are not unheard of or uncommon, but they are much less popular than pale ales or IPAs. 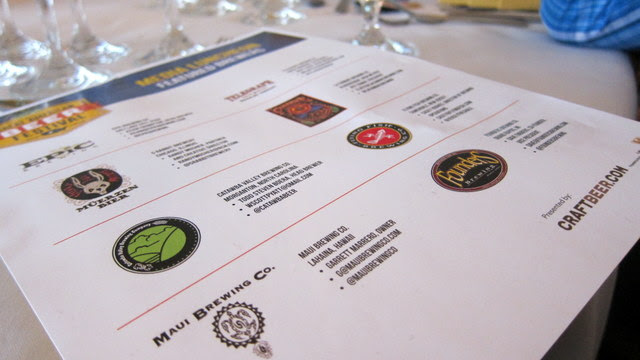 A big thanks to all our supporting breweries for sharing their delicious products. 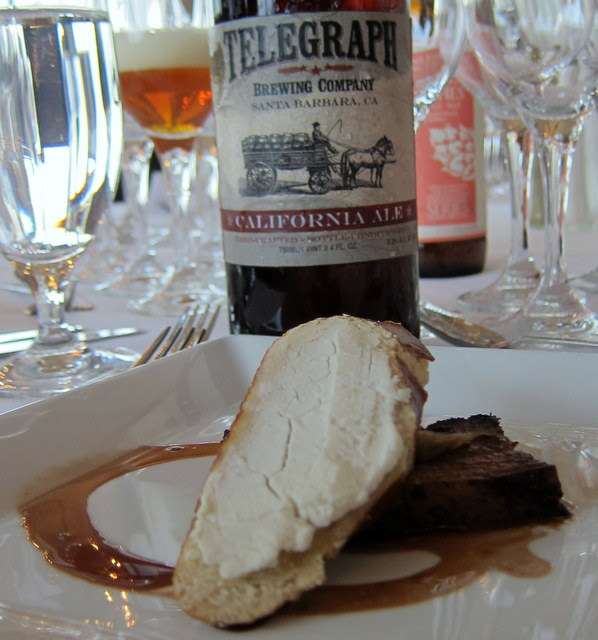 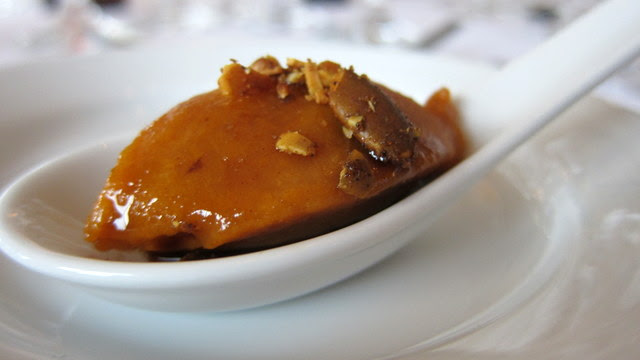 I must say that I am biased.  I love pumpkin.  So when I declare this to be OMFG amazing, the pumpkin flavor didn't hurt.  This pumpkin sorbet was incredibly smooth, rich, and creamy with bold pumpkin flavors.  The salted toasted pumpkin seeds on top contrasted nicely with the sweet sorbet.  This dish was paired with the Vida y Muerte from @5RabbitBrewery.  It had Latin influenced flavors in the beer, and this is yet another example of embracing the atypical.  Austin's own Twisted X has a varieties of Latin influenced beers, which have been well-recieved.  This was my favorite course. 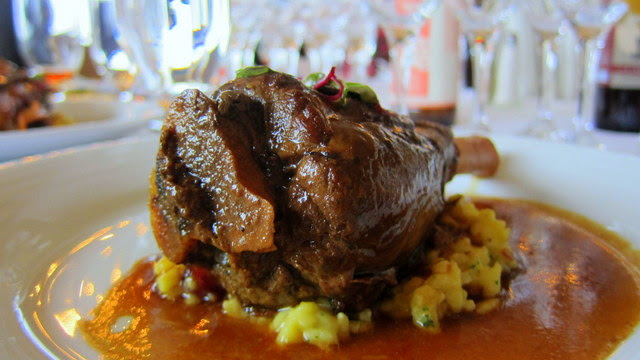 Next up was the Braised Colorado Lamb Shank braised witth Odell's Cutthroat Porter, severed with golden beer and cranberry risotto, Bulls Blood Micro Greens, and Mint Vinaigrette.  It was paired with the Elevated IPA by La Cumbre Brewing and Le Saison Noire by Catawba Valley Brewing.  As you can see, this was not a frugal offering. This course was made for someone like me, a hungry someone. 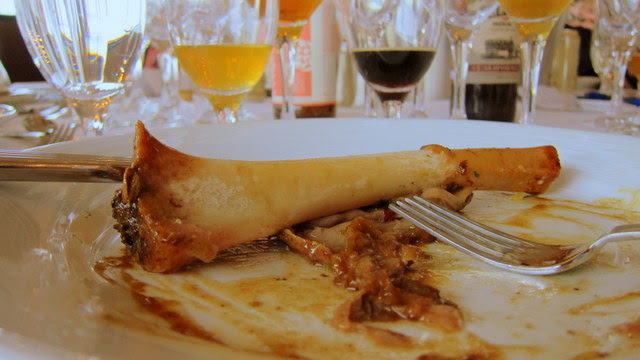 The Hyatt did a fantastic job executing this dish.  The sweet caramely and unami flavors of the tender meat was perfect with the bitterness of the microgreens, texture of the risotto and tanginess of the cranberry.  It could not have been done better.  Though the two beers that were served with the course were vastly different in they way that they paired, I appreciated both beers with this dish.

I'm not sure who did this to my plate.  It must have been a lamb eating gnome.  I'd blame it on @VestaTheDog, but she was at home. 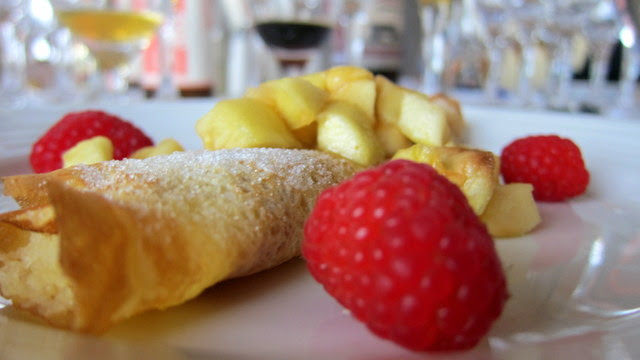 Yet another course that has a leg up on my love list.  I love almond, and I present to you this apple crepes filled with almond frangipane and cardamon caramel paired with Flying Fish Brewing Exit 4 and Maui Brewing La Perouse White.  I don't remember much else from the dish besides the almond.  That's all I could focus on. 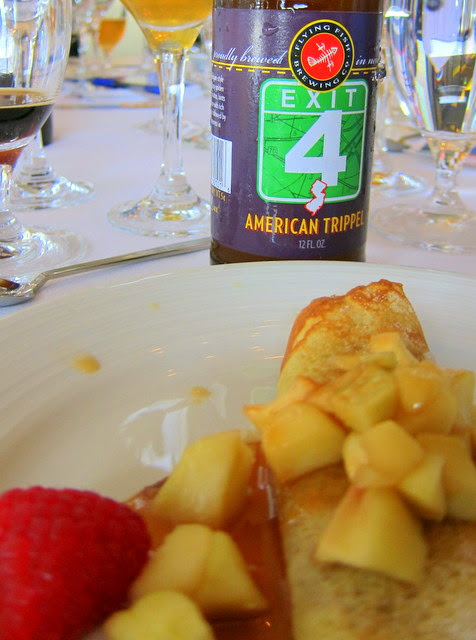 The two beer pairings were also well-balanced.  Dry finishes paired with sweet were great strategies.  The pairings at this lunch were probably one of the best ones as a whole.  None of the dishes were too busy or outlandish that the beer couldn't balance them.  The food was all so well-executed that they didn't draw out any flaws in the beer either. The last course was Buratta Cheese, Taylor gold pear brulee, and cranberry job paired with Founders Brewing Blushing Monk.  This raspberry infused bevy had enough tartness to moderate the creamy goodness of the cheese.  This was a lovely pairing that I'll likely be serving in my own home in the future.  I've been to a vast variety of beer pairing meals, and this is the first time that I've had fruit infused beers as part of the course.  This stresses again the second theme of GABF this year: embrace the not as mainstream beer styles. 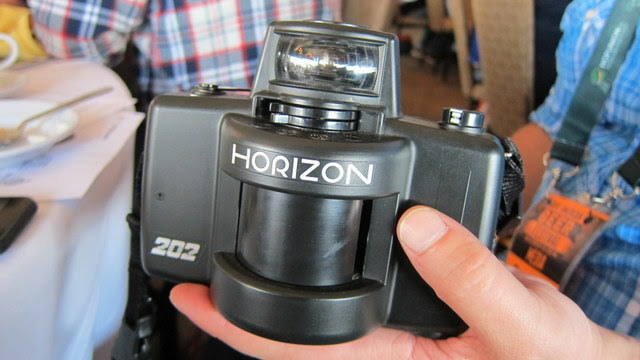 The Orange County Beer Blog had a film panoramic camera.  I thought that was pretty awesome.

And here's a photo taken with the panorama feature on my iPhone5.
Posted by PookieSoup at 5:02 PM No comments:

Nibbles and Bites at Higgins in Portland, OR