I was pursuing a certain discount home goods store on an empty stomach.  I wandered into the snack section, and I picked up a bag of coconut chips because they appeared to be relatively low calorie.  They were quite possibly the best form of coconut I have ever had in my life.  Slightly sweet, just a touch salty, very crunchy, and with nutty aroma of coconut, though on the pricey side with 3.99 for two ounces.  The product is pretty difficult to find, and it listed as sold out on Amazon frequently for about 3.89 per two ounce bag.

I found that Trader Joe's has a product that is pretty close to the Danielle's chips.  However, it is still a little on the expensive side (1.99 for two ounces).  I also tried several other products that didn't quite cut the mustard so I won't even bother.

I did think about making these chips myself.  I went by Central Market one day and found coconut strips that were roughly the same size in the bulk section.  They were about 2.27 a pound, which is significantly cheaper than the other options,  Theses strips were thinly sliced, plain, and rather limp.  There were several attempted involved in turning limp coconut flakes into crunchy delicious treats.  I can eat an entire pan in a blink of an eye. 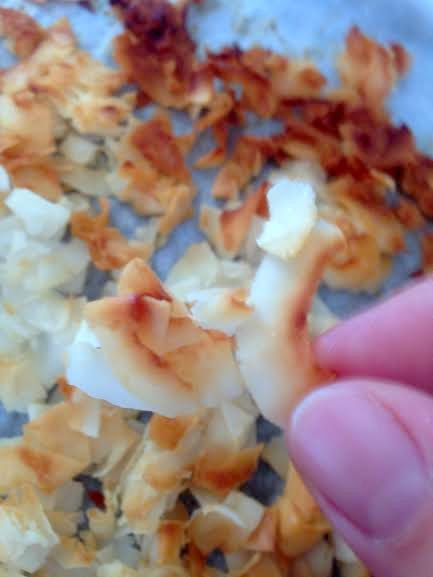 I forgot to rotate this pan so some are a little crunchier than others.

3. Layer the coconut on the parchment paper.  It is okay to have some of them clumped, but it is best to keep the layer as thin as possible.  Bake for 10-12 minutes, and watch carefully.  If your oven is a little bit uneven heat, make sure to rotate the pan  throughout baking.

4. Once the coconut is just starting to turn golden (10-12 minutes), turn off the heat and allow the coconut to dry out a little more.  When cooled, serve straight up, as a garnish, or dipped into nutella.

Note: If you leave this sitting out or if you don't let it fully roast, it might get a little soggy.  Just reheat in the oven at a low temp to crisp up the coconut again.
Posted by PookieSoup at 9:00 AM