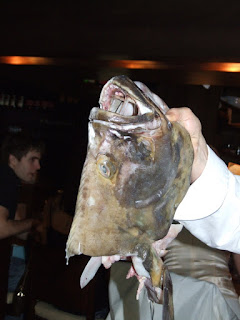 I used to have a favorite place to go for celebrations. The service here was spectacular. The food was incredible. Every dish was interesting and exciting. This place was Uchi. I've been to Uchi 4 times in the last few months, and I had a terrific time on each visit. One of my photographs of an Uchi dish was even published recently. Link here: http://www.schmap.com/austin/restaurants_japanese/#p=324344&i=324344_12.jpg Here's a link to a previous review I wrote of Uchi. To say that I was a fan of Uchi is an understandment. However, I feel that Uchi committed a public relations/marketing error which completely changed my attitude about my previously favorite restaurant. The story unfolds....

After the yogurt making party at Megan's house, I checked my twitter. I saw this on Uchi' Twitter "http://twitpic.com/4vfv2 - 40lb halibut today! first person to come request, chef tyson cole will prepare the collar and head for you!!!..." Link to Uchi's Twitter: http://twitter.com/uchiaustin Link to the Tweet: http://twitter.com/UchiAustin/status/1749327681 That was posted at 4:18 pm. It was close to 7:30 pm, so chances that I would have gotten the halibut head were slim. Since Uchi was on the way home anyways, I stopped by just to see if it was still available.

The hostesss had no idea what I was talking about and had to ask Tyson. Apparently, I was the first person to ask about this mysterious fish head. About 10 minutes later, Tyson brought it out and showed it to me, raw. I was confused. I thought he was supposed to cook it first. We're both standing at the front with this gigantic raw fish head. He asked if I was eating, and the answer was yes. I did come for the halibut didn't I? He asked if anyone one else was going to eat with me, and I said no. He replied saying he wouldn't cook it for one person as it was a massive amount of food. I said fine. A friend was going to be joining me.

At this point, I was really confused. Why had no one else claimed this "special" dish if Uchi already had 684 followers on twitter? How often was this halibut available and what was the price? From the few words "40lb halibut today! first person to come request, chef tyson cole will prepare the collar and head for you!!!..., "It seems like a special, and maybe even complimentary. Why didn't the hostess know anything about the special? Someone's confused, and that someone was me. I wasn't getting a good vibe, and had thought about ditching. But heck, Uchi was my favorite place. I decided to stick it ou.

By now, everyone knows that we've ordered the halibut, and the waiter tells us that it is a 20-25 minute prep time on the halibut head. So we order the brie seneca, which comes and goes. We're offered a salad of some sort by the manager, which comes and goes. 9:50 rolls around, and we're looking pretty annoyed. My friend lets the manager know that we've been waiting nearly an hour for a dish that is supposed to take 20 minutes to prepare. The manager says that they started the dish when we were seated, and that they are just now plating it. Funny. We were seated at 9:00pm. They should have said that the dish takes an hour to prepare. 10 minutes roll by. 5 more minutes roll by. I'm feeling like walking out at this point. I really felt like leaving at this point.

Finally, I'm presented with this gigantic fish head that has everyone around us oogling. That's cool. I take a while to snap some pictures. And then we dig in. It was big. It overly salty and not at all special. It wasn't anything that wowed me. It wasn't "delicious" by any means. I would 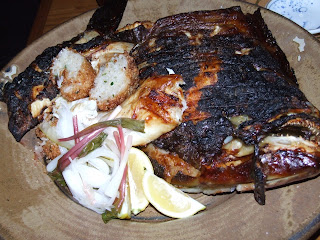 have been much happier with the hotate, shag roll, or kona kanpachi. It tasted like cooked fish with a salty, blackened crust. And unfortunately, the rice it was served with was terribly salty. This was not a typical Uchi experience. This was the only time I have ever had a less than stellar experience at Uchi, and it did suck the big one. My friend and I ate maybe one-tenth of that sucker, and then had the rest wrapped up to go. I think it is very safe to say that I'm a big eater, and the fact that two people barely touched the fish means something. I wouldn't have waited 20 minutes for the halibut head. And it isn't that I don't know how to eat fish heads. I've been eating fish heads all my life. This was just like another fish head.

The check comes, and I see that the halibut was $50. Um....... okay. Where was that listed on the twitter? It isn't on the regular menu. I had no idea how much it was supposed to cost. No one made mention of the cost to me at any point. If anything, the Twitter posts and interaction with the hostess makes it seem complimentary at best. The waiter asks for the manager.

I wound up paying 54.13 pre-tip for that over salted uninspiring halibut head that took 3.5 hours of my life. I was annoyed. I was upset. If the tweet had said "$50 for halibut head, special deal" or something of that nature, I would have saved myself a big wad of cash and some time. I would have gone straight home, ate leftovers, and spent time doing something productive. I had absolutely no intentions on eating at Uchi tonight, and I was only brought in on the fly by the truncated tweet.


This is why one star reviews of Uchi exist. If tonight was my only Uchi dining experience, I may never come back again. I'm still very upset about last night's experience now. I hope that in the future, they can get all their staff members on the same page and advertise their specials more accurately.
Posted by PookieSoup at 9:48 PM