Biologically, men and women are not the same.  No one seems to have a problem with that statement.  Men (the blue curve) and women (the red curve) differ on height.  The average man is taller than the average woman.  And that's just fine.  No one gets angry about that. 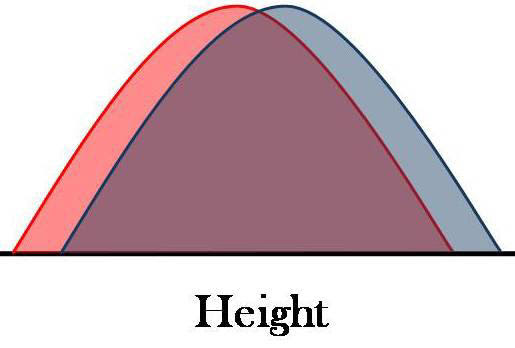 The average woman can naturally lactate (with the right combination of hormones after giving birth) better than men, on average.  I'm sure some man out there will find the "how-to" articles online, achieve lactation, and write me about it.  I've heard of it happening too.  I want to see some video proof.

The average man can probably grow a #Movember mustache better than the average woman, for the most part.  I'm sure there are some women out there who are really good at growing facial hair (hence the blue and red curve overlap), but I digress.  Also, I'm on the #TeamAUS #Movember team.  I'm growing a Mohawk for #Movember.  Donate to my team if you can.

However, when one brings up differences in behavior and preferences in men and women, feathers get ruffled.  Data shows that women and men are indeed different, behaviorally.  There is a plethora of evidence that shows that our brains develop differently, which is mostly driven by the types of hormones each gender is exposed to during development in the uterus and beyond (nature).  Men and women like different things and communicate in different ways.  These differences are independent of nurture, socialization, culture, and media.  Some of these behavioral differences have been shown in babies as young as four weeks old.  Some of these differences have been replicated in non-human animals as well which is evidence that the differences are not due to environmental effects.  I can't remember the last time I witnessed monkeys or rats in the wild reading Cosmo or Hustler.  Differences between male and females of the respective species cannot be attributed to obvious social pressures.  Different isn't wrong, and different isn't bad.  Different is good.
I've been involved in many male-dominated communities  From performance driving, auto-crossing, clean driving, start-ups, science, tech, and the beer industry, I'm surrounded by men.  Rarely is there ever an issue that I'm a woman.  On occasion, a big jerk will come onto the scene trying to start some trouble, but those instances are rare and infrequent.  I've noticed that in the other previously listed areas there have been movements for women.  Women in Tech and TedWomen are just two.   With the development of these groups, there seems to be two basic reactions: 1) I'm offended. We don't need a separate group to hang with the men. We are just as capable as men.  2) I like having the companionship and support of other women.
The formation of the women centered subgroups can cause massive disruption, no pun intended.  Read @michellegreer's blogpost about her experience here.  The behavior of some of the men in those communities is completely unacceptable to me.  Those big meanies better keep hiding behind their computers for my ninjas are truly unhappy.  The situation was worsened when there was a panel on women in tech at Tech Disrupt.  To make matter worse on top of that, some jerk of an angel investor asked for a booty call.
Something similar happened at the Women in Craft Beer panel at #bbc10 (minus the booty call, I think).  Individual opinions were expressed about the state of women in craft beer, and that didn't go over so well with the audience.  Instead of having a clear theme of advocating for women in the industry, individual opinions clashed with each other.  My statement from the audience was that having women leaders in the field is pretty cool.  I love @chocolatestout and @lyonsgal.  On occasion there will be that big jerk in the beer community (very, very, very rare in the beer community), and I find it nice when women can be supportive of each other and show that big jerk a thing or two in brewing.   I left that panel with mixed emotions.  This was a community that flaunted supportiveness, tolerance, and understanding, but the tone of the conference seemed to change drastically after the panel.

Ultimately, the potential for passion in the craft beer industry in men and women can be the same.  Men and women can equally become movers and shakers in the craft beer industry.  How someone decides to promote their blog to men or women is their own decision.  I don't care what demographic reads my blog.  If I inspire just one person of any gender (or even those who are unsure of their own gender) to try craft beer, that's cool.  If someone wants to communicate with me because I'm a woman in craft beer, that's cool too.  I don't have any big agenda on my blog nor do I directly gain anything financially.  Though I've sold quite a few Thirsty Bird Threads items, it will ultimately be a financial loss as I donate the proceeds to the Texas Craft Brewer's Guild and other causes.  I'm quite okay with outcome, as it is my hobby and passion.  I've spent 100s times more on dog showing than I have in the craft beer industry.  :o)  I have a day job to pay the bills.
You can read about other attendees' posts about the issue here.
@JamesPalvik's post: http://csasylum.wordpress.com/2010/11/08/beer-blogger-catfight-the-women-of-craft-beer-cage-match/
@Goats_Udder's post: http://www.fugglybrew.com/2010/11/real-women-drink-good-beer.html
@GirlsPintOut's post: http://tx.girlspintout.com/590/the-female-craft-beer-contingency-is-not-monolithic
@LaurenPolinsky's post http://bitchinbrews.com/craft-beer/women-and-the-beer-bloggers/

@TheBeerBabe's post http://carlacompanion.hoppress.com/2010/11/08/bringing-women-into-a-craft-beer-blogs-audience-as-people/
If you want to know about the conference demographics, check out my chart below.  These were the numbers provided by Allan Wright.  Nearly on third of the conference attendees were women (incredibly hot women if I must say so myself).  @StoneGreg was lucky to get to have his photo taken with them. 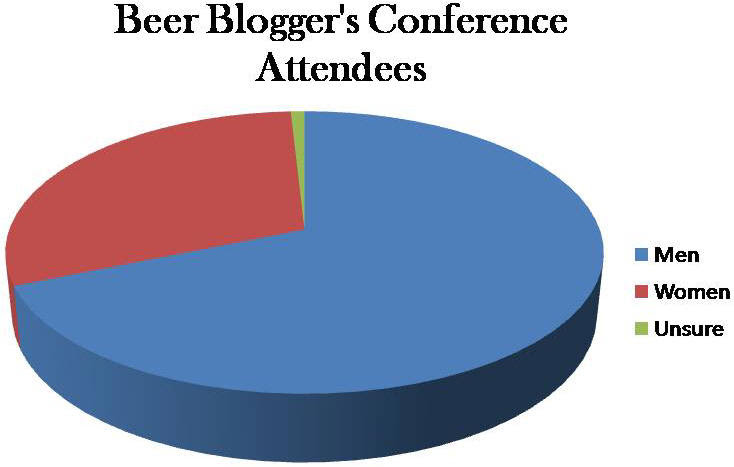 *The statistician in me requires that I add 1% unsure as the gender classifications were not self-reported.
**My research area is in hormones and behaviors, specifically sex hormones and sex behaviors.  I'm happy to provide references for the data I cite.
Posted by PookieSoup at 9:41 AM