I don't typically post about products, but here's two very different products that are absolutely amazing.  Naan and Pie.  They have nothing to do with each other besides the fact that I recently discovered  them.  For Thanksgiving this year, I decided to make a mutton bryiani.  I went to Madina Market to pick up some mutton (goat), and I wandered around the store to find some naan to serve with the bryiani.  I asked the store manager (he's the one behind the cash registered every time I visit) which brand was his favorite, and he immediately pointed to a bin right in front of the checkout counter.  The brand is Sher-e-Punjab made in Canada.  I don't believe there is a website for the company.  Upon his advice, I purchased two packages of the naan, zaatar green, a samosa, and a chicken roti.  The samosas there are only $1, and while they aren't my very favorite, they suffice.  The chicken roti rolls ($2) are absolutely amazing.  Roasted chicken is rolled in roti bread along with mint chutney and silvered onions.  Best lunch you will get for $2.

I served the naan along with zaatar green and olive oil on Thanksgiving Day, and it was a hit.  The naan can be microwaved or toasted. and either way, it is the best naan I have ever had.  I hate to say it, but this premade naan is better than even homemade.  Below was a photograph of the naan and bowl of zaatar green. I only like the WHOLE WHEAT naan from this brand.  I tried the garlic and the original, and they were just meh. 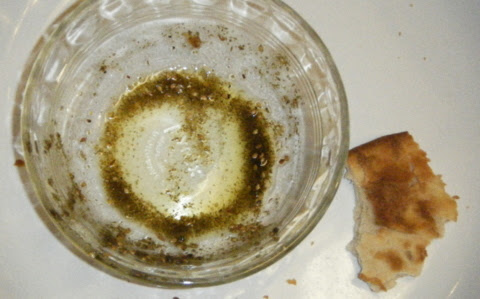 The inside of the naan is light and fluffy.  The outside is perfectly toasted and golden brown.  Words cannot do justice the texture of the naan.  It is fantastic, and pre-made nonetheless.  I currently have three bags of naan in my freezer now.  To serve, I pop it into my toaster over for one dark toast cycle.  Serve with hummus, olive oil, or zattar green.  I get mine at Madina Market at Rundberg and Lamar in North Austin.  It may be available at other markets as well.  If you buy some, pick up a few for me.  Also, have a samosa or chicken roll up. This chocolate is the second delicious item that has really impressed me.  It isn't something that you can buy off the shelf like naan; it is the chocolate pie from Monument Cafe.  I recently received one of these pies courtesy of Monument Cafe.  I put it into the fridge without really giving it much though.  Later that night, my sister came over for dinner so we broke out the pie.  This is no ordinary pie. The chocolate filling is thicker than a chocolate mousse, and not too sweet.  The crust is literally candied walnuts.  We had this pie with 512 Brewing Pecan Porter, and it is amazing.  At the next dessert and beer pairing, I will serve this pie with Pecan Porter.

These $20 pies at Monument Cafe are a cheap ticket to heaven. 48 hours advanced notice for the pies (because I will eat them all).  Thank you to Monument Cafe for the delicious treat.