The next set of interviews are quite interesting and diverse.  I asked the following chefs, How do you define a food destination?  How does Austin stack up?
Andrew Zimmern said that Austin’s food scene is already out of control, in a good way.  “There’s so much good food in this town.  There’s certain cities in the world that being experienced at is okay by the consumer.  You have so many artists, bands, and college students.  Those are typically groups of people who don’t mind being experimented at.  Snooty 50 year old suburban folks in Midwestern cities don’t like being experimented at.  San Francisco is the only big city in America that its okay.  Even in New York, they don’t like that.  In New York, you have to be good right out of the box.  It is so competitive.  Here, you can not be good and still be successful.” 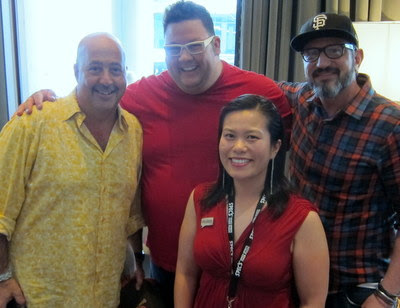 Andrew Zimmern with Graham Elliot and Merlin Verrier at the Food Republic interviews.
In short, Austin is special.  It is a great place for entrepreneurs and creative types to master their art and build a large audience.  That is quite an interesting perspective.  Austinites are okay with experiments, or dishes that don't wow. 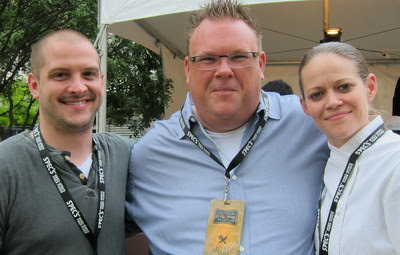 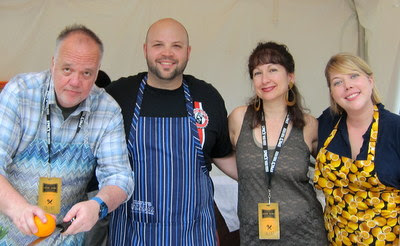 Sarah Grueneberg with her crew at the 2013 Austin Food and Wine Festival Rock Your Taco.

I really love Sarah Grueneberg.  She's from a small coastal town in Texas too, and it is exciting to see someone from I could identify with become a huge star. Sarah Grueneberg's definition of a food destination is "A town with that’s full of chefs and restaurants searching for great products and cooking foods they like.  They cook what they want to cook.  I want to see that.  I want to see what style the chefs are trying to show.”  If chefs are a little too out there with their dishes, they can try small plates or send experimental dishes to tables who have already order some pretty solid classic dishes.  Go out there and describe it.  It is about trusting the chef.  For diners, I think when they have lived with a chef on television, they are more willing to trust the new chefs.  They will be more willing to try things like sweetbreads."

Posted by PookieSoup at 9:00 AM