January 13th was the first every Ignite Austin.  I was lucky enough to be invited to give my talk to 400 super rad and active Austinites.  From IgniteAustin.org:

Ignite events are talks given in five minutes, 20 slides. What would you say? At Ignite Austin, 16 artists, technologists, thinkers, and personalities will take the stage to answer this challenge. The goal is to spark new conversations and collaborations across cultures and disciplines throughout the city of Austin with fast-paced, bite-sized presentations. It’s a great opportunity to meet smart, interesting people (if we do say so ourselves) and maybe even learn something.
Though my original submission to Ignite Austin was on Clean Driving and modifications that the City of Austin could make to improve and green their traffic design, I didn't have time to prepare that particular talk.  Instead, I decided to give  my talk on oxytocin, a hormone I have been researching for the last five years.  I currently have one book chapter in the Endocrinology of Social Relationships edited by Gray and Ellison.
Follows are several photos from the event and my talk in online version.   If you are passionate about something, and you want others to learn about it too, submit a talk for the next Ignite Austin.  It's a blast!  Photos from John Knox, Eugene Hsu, and video from Greg Ackerman.  Thanks to Chris Lamprecht for proofing my talk.

Video of the talk: http://www.youtube.com/watch?v=znExUWZClh4 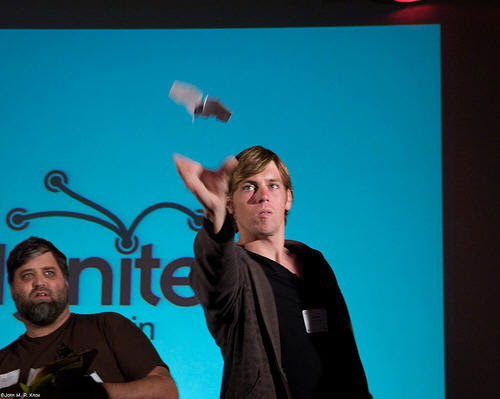 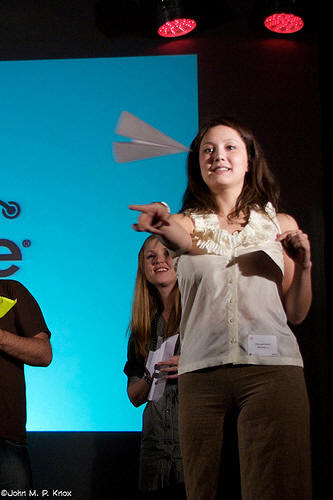 And some planes were more agile than others.  This one did a 90 degree turn.  Photo by John Knox 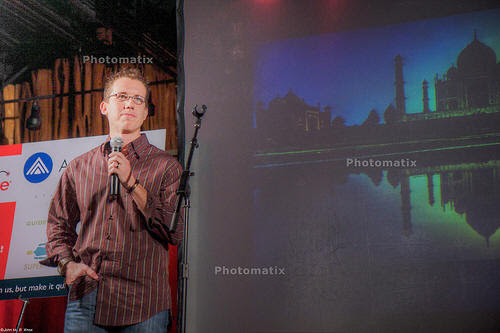 This is John's first attempt at HDR photography.  The subject of the photo?  Trey Ratcliff, a well-known HDR photography guru.  Isn't it ironic? Photo by John Knox 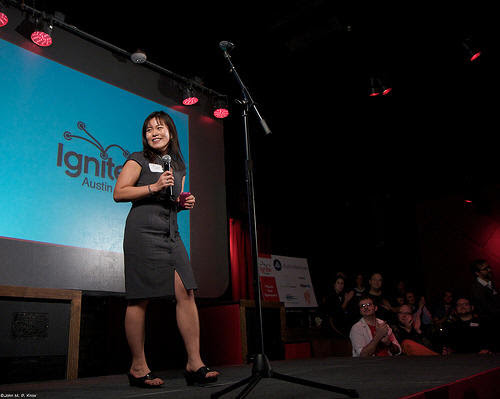 The talk is starting. Photo by John Knox 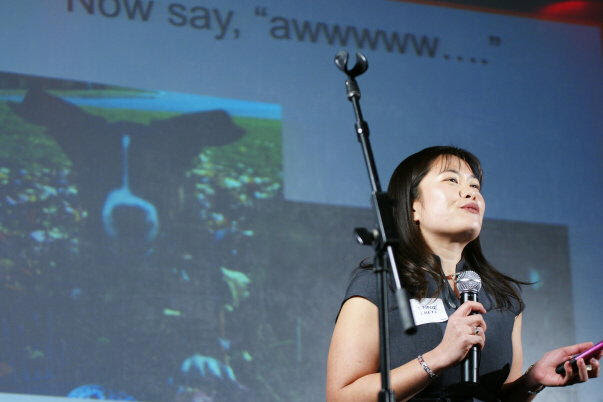 Aw.... isn't that puppy in the back cute? Photo by Eugene Hsu. 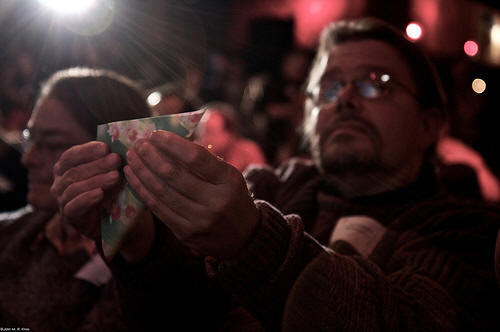 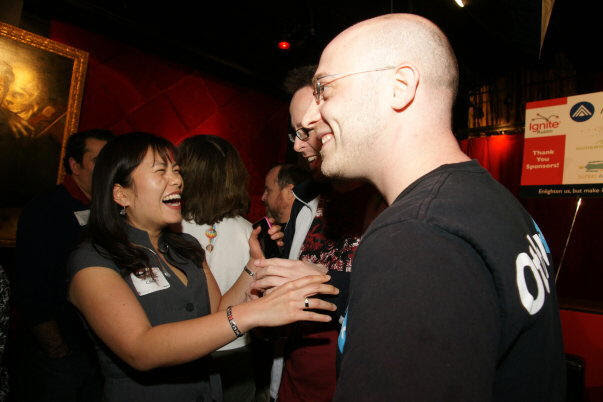 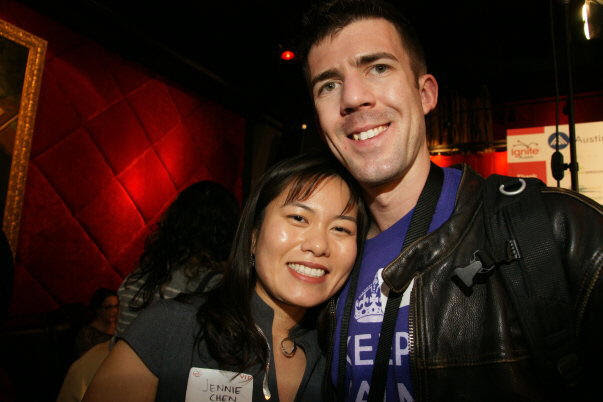 Getting my oxytocin from @windaddict. Photo by Eugene Hsu.
The talk starts now......the text for each slide is underneath it. I have added extra comments and information that were not in the talk.  You might notice that there are less than 20 slides.  Some slides were repeated. 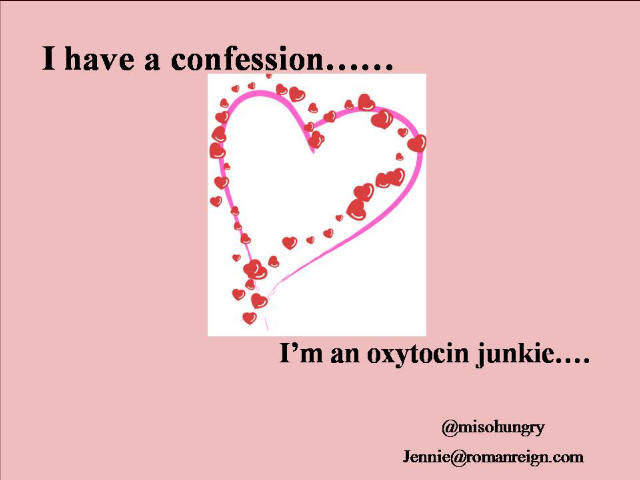 I have a confession…. I’m an oxytocin junkie, and maybe after the next five minutes, you will be one too.  I said Oxytocin, NOT Oxycontin. 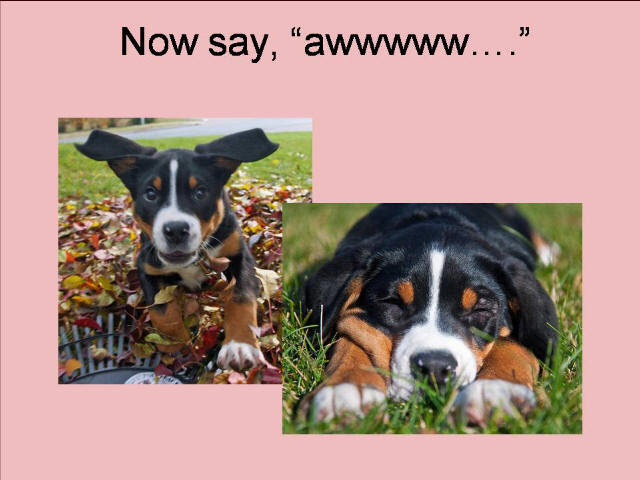 Now we’re all going to have a little oxytocin. When the next photo shows up, every go aw…… Did you get the warm fuzzies?  If you did, enjoy your oxytocin. If you didn’t, you’re a cold hearted monster. 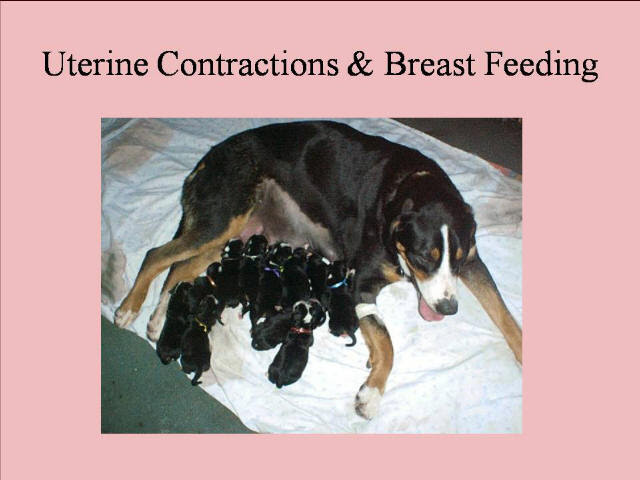 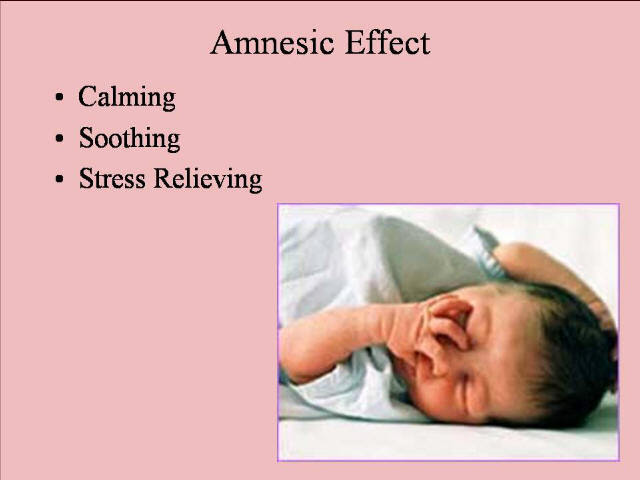 Oxytocin has an amnesic effect, especially in stressful situations.  It suppresses memories of those painful moments; this is most advantageous during childbirth.  In mice that were injected with oxytocin (into the brain), they don't remember bad experiences.  You can shock them all day long, and they don't remember a thing. 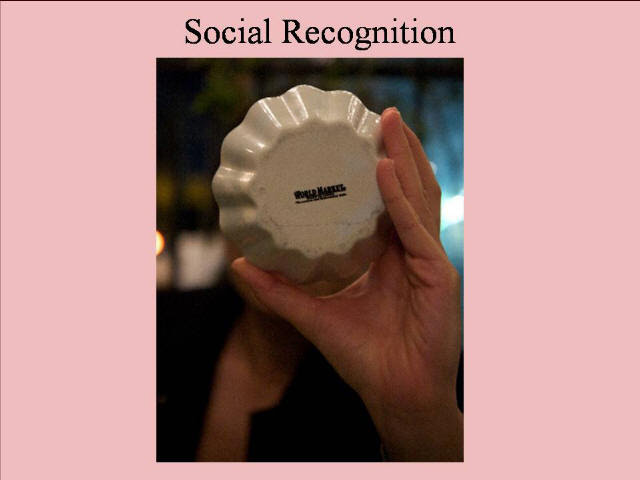 Oxytocin is also critical for social recognition.  For strains of mice that do not have oxytocin receptor sites (called oxytocin knock-outs), they also seem to not recognize each other.  It is as if after my five minutes, you still won’t recognize me. For those of you who have had too many drinks or have been spending the last minute playing with your iphones and blackberries, you might not recognize me for a different reason. 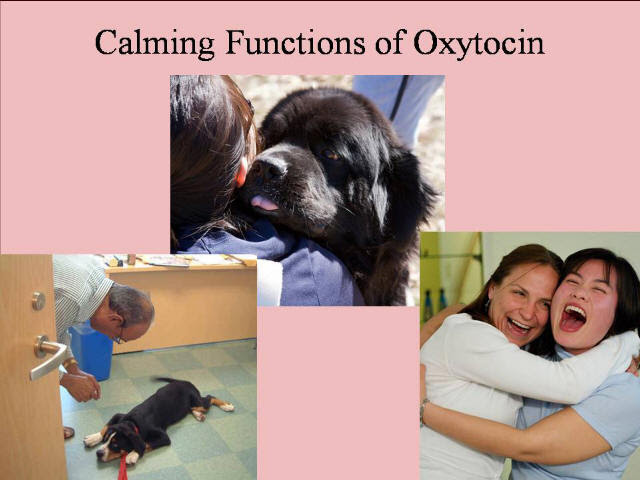 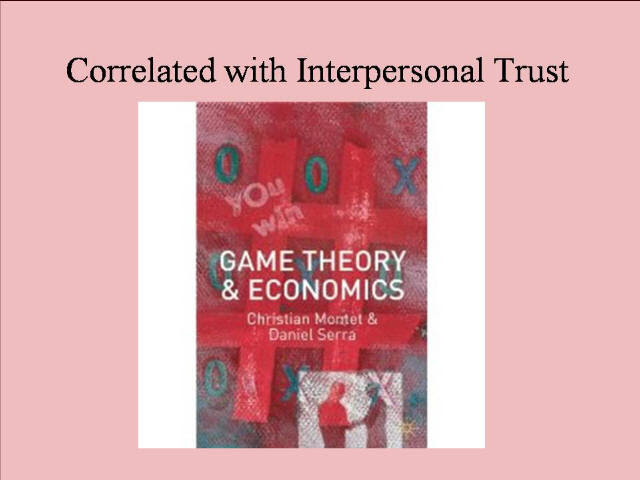 In an economics game based on trust, researchers found that players with higher levels of oxytocin tended to trust and reciprocate more.  Some companies quickly jumped at the chance to manufacture oxytocin. 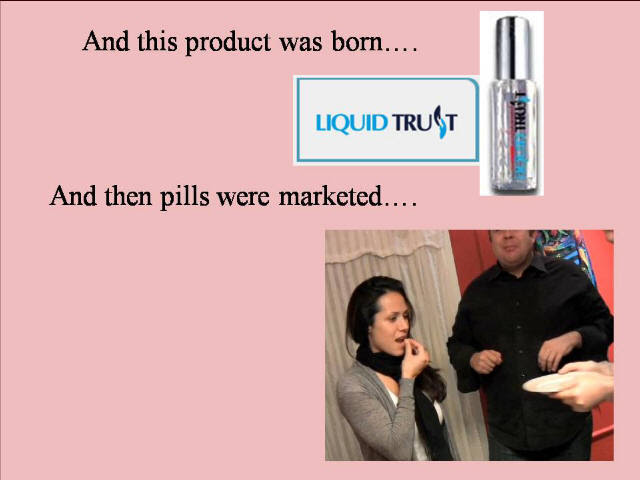 “Liquid Trust” is supposed to be sprayed on your body so that other people will start to trust you.  Oxytocin cannot cross the blood brain barrier, and it is in no way detected by the olfactory system or the Jacobson's organ (VMO).  This product is a fraud, however, I do have small vial that you’re welcome to try. The second product is oxytocin tablets.  However, it will never make it past your stomach acids and into your bloodstream. Let’s move onto how you can release oxytocin on your own. 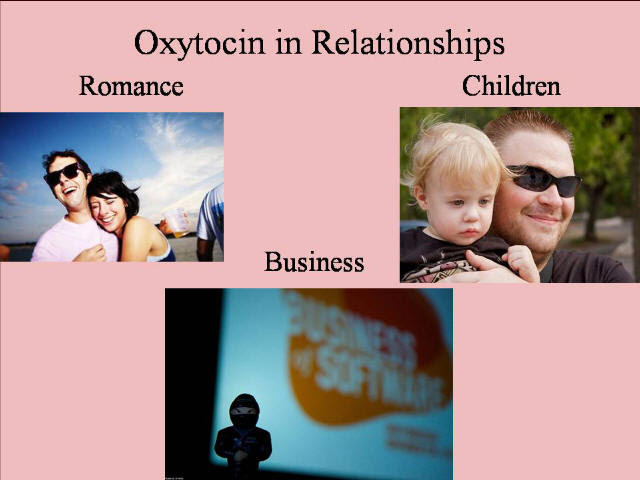 One of the easiest ways to facilitate oxytocin release is with a hug.  Hugs are not only free, they are also environmentally friendly, legal, calorie free, and you get a dopamine bonus. 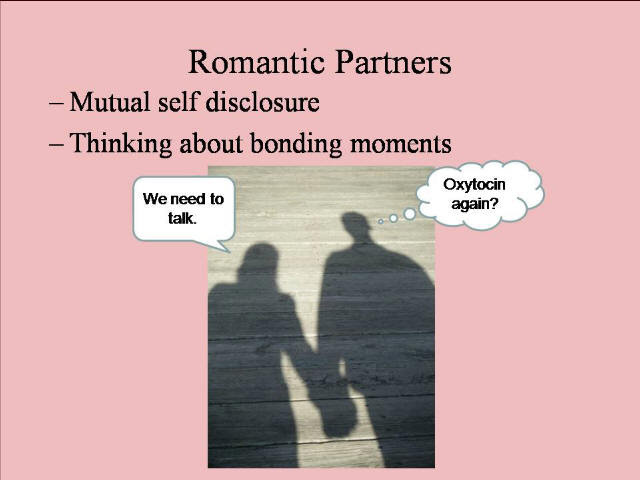 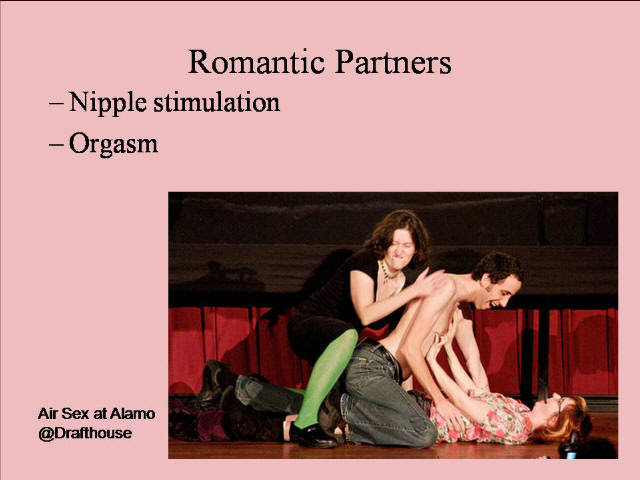 Now if those methods don’t work, you can also go to the old fashion methods.  Nipple stimulation.  That’s right, just start titillating those nipples to get the oxytocin going.  And there’s also orgasm.  To go into that will surely put me over the 5 minute time limit, so we’ll save that for another day. 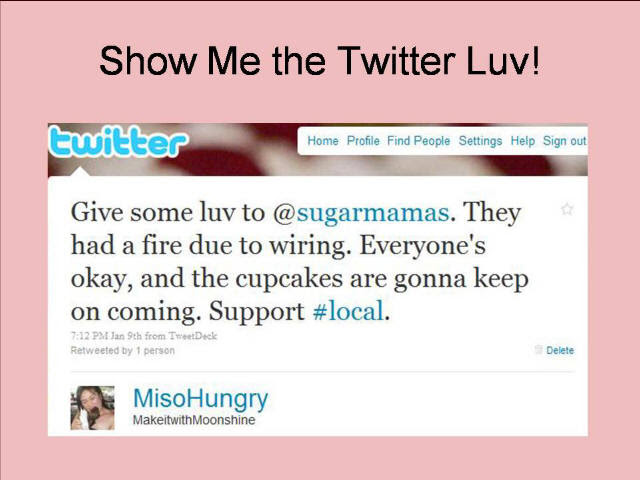 Bonding and oxytocin release don’t just happen in real life with warm physical contact, it can also be released when people receive social support.  My study found that women who received social support from their partners tended to release oxytocin and became less stressed.   Social support, even online, from a variety of sources like Twitter, Facebook, or support groups can facilitate oxytocin release.  I frequently ask for it online.  Just search for how many times I use the word "luv." 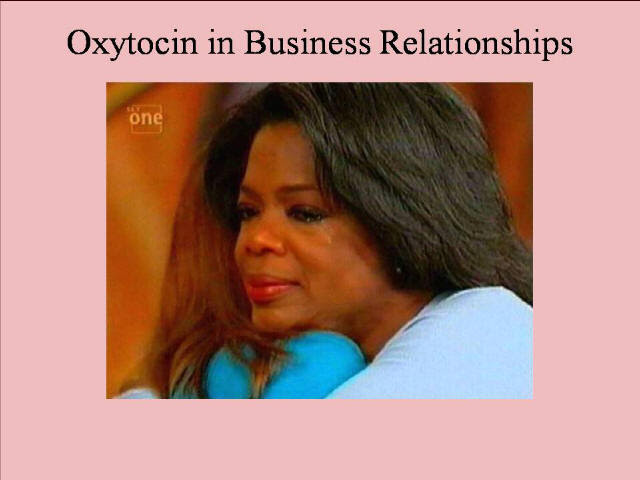 It shouldn’t surprise you that I’m a big proponent in nurturing business relationships.  You know the saying, it’s not always about what you know, but who you know, and hope that they like you.  Relationships are an integral part of business.    Here’s an example of my dog using oxytocin to generate some cash flow. 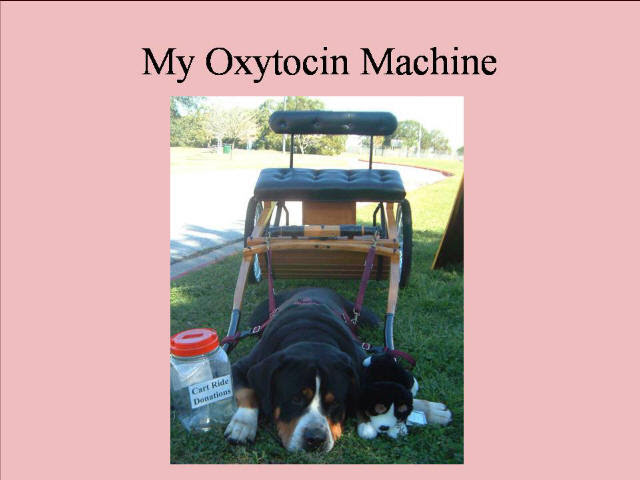 This is my dog. His name is Mouse.  He is an oxytocin machine, and the best marketing tool.  He has made up to $175 in two hours just laying on the ground looking pathetic.  There’s only one job I can think of making that much money by laying around, and it isn’t legal. 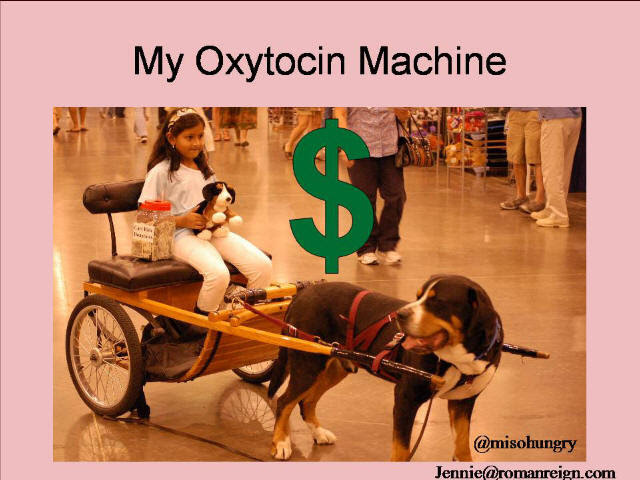 When giving children cart rides not only does Mouse make everyone fall in love with him, I have the children hold the donation jar. As we circle around, people instantly start snapping photos and feel compelled to fork over the cash. As we end the ride, I take a photo with a Polaroid and hand it to the parent. If you're at all familiar with exchange theory, you'll know what's coming next.  When asked how much the ride costs, I say, “It’s free, we do it for luv,” and out comes the wallet.  Thank you very much. Hope you get some tonight. Oxytocin that is.
~~~~~~~~~~~~~~~~~~~~~~~~~~~~~~~~~~~~~~~~~~~~~
During my talk, someone wasn't listening, and she tweeted this.  It was brought to whurley's attention. He had no choice but to show the world this epic tweet.  That's right. If she learned nothing from the other 17 Ignite Austin talks, at least she learned what is most important in life. 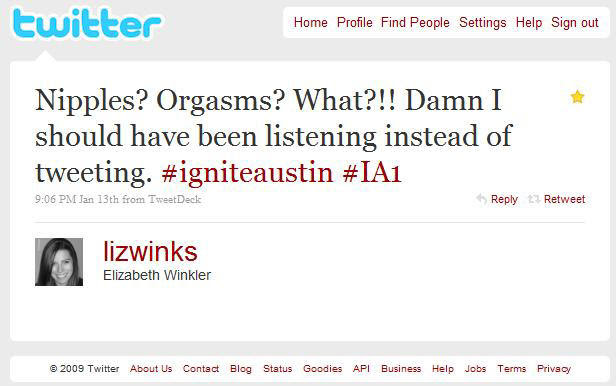