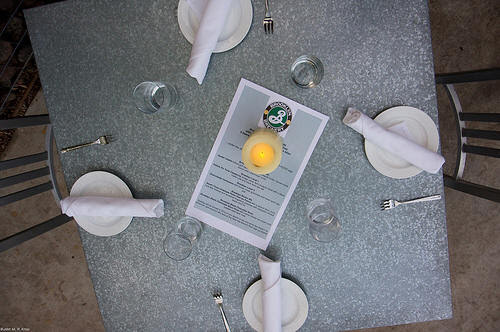 I am a lucky man. Not everybody gets to enjoy not only the flavor of his food and drink, but also a lavish pairing of beverage and dish. If pairings aren't luxury, I don't know what luxury is.  In my mind, pairings are the luxury of bank robbers, workaholic investment bankers, and Bond villains. Consider some typical American meals. At McDonald's, do the patrons match their soft drink with their burger? Not that I've seen. Do the busy college students at Starbucks consider their muffin choice when ordering their flavored latte? What about diners at Outback Steakhouse, will they eye the beer selection to find the mate for their Bloomin' Onion? Sadly, they're more likely to choose a beer to match the decor of the restaurant.

I'm not complaining though. Sometimes you just want to relax and eat a meal without thinking too much. And pairings are dangerous. Just like driving a Ferrari will ruin your enjoyment of a Honda, enjoying good food and good drink paired could ruin your enjoyment of the average meal.  Olivia Restaurant (2043 S Lamar Blvd Austin, TX 78704 (512) 804-2700) presented the a Brooklyn beer pairing event as a multi-course dinner on their garden patio. Between each course, a new beer was served, and Garrett Oliver or Executive Chef James Holmes would talk a little about the pairing, the food, the history of craft beer in America, and the story behind the beer.

Before the first course was presented, each guest sipped an unusual aperitif: a half glass of Brooklyn Lager. The Lager had a very clear amber color, a short head, and light carbonation. The flavor finished lightly bitter, a quality which matches many more traditional aperitifs. The beer left the palate feeling scrubbed clean and ready for the first course. 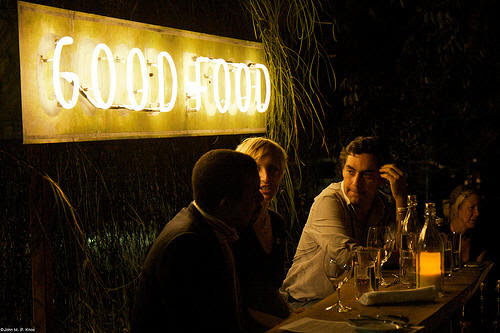 As the first course arrived, Garrett stepped from behind his table to tell us a little about his experiences with beer. He spoke of the complementary nature of brewing beer and making wine. "It takes a lot of good wine to make a good beer." Olivia Manager Jerry Reid countered that it takes lots of beer to make a wine. If not true, it should be.

Garrett spoke of how he grew up in the post World War II era of industrialized, uniform food and beer. At some point, Garrett moved to England, where he was bowled over by the world of flavorful European beer. Nothing in his experiences with industrial American beer was comparable, and so he became obsessed with bringing those flavors back home with him. Garrett explained the Lager as being made in the style of a 19th century Viennese beer, but with the addition of a dry hopping step to enhance the aroma. As the number three draft brand in New York City, Garrett considers this his flagship beer. 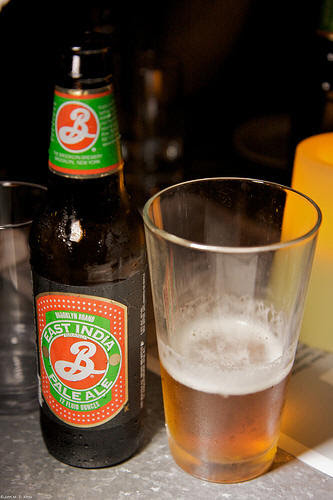 For the first course, the Brooklyn East India Pale Ale was paired with Oyster Diablo. The ale arrived before the meal, delivering a nice hoppy punch. In contrast to the lager, the East IPA had a dryer, less malty flavor. Hops were the dominating character, although as Garrett explained, these hops offered a less fruity flavor than the typical American IPA. I found that the East IPA's flavor ended cleanly, with a short finish instead of the lingering bitterness found with many other hoppy beers. 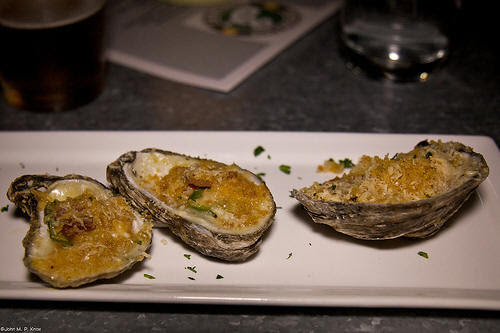 The Oysters Diablo arrived on the half-shell, each mated with Olivia-made bacon, spicy tequila butter, and a golden crust of parmesan cheese. The food alone seemed well balanced to my taste. The spice, cheese, and bacon flavors each balanced and complemented each other. The crunchy texture of the cheese and bacon helped give the oyster structure without dominating the plate.  Paired with the East IPA, the dish tasted sensational. The hoppy beer and the spicy oysters fought delicious battles in my mouth. As Mr. Oliver pointed out, "Spice and Kick go well with bitter hops." I agree. I felt torn between sadness and anticipation as I finished the crumbs of the last oyster.

The second course featured the Brooklyn Local 1 paired with thinly-sliced yellow fin tuna carpaccio and black truffle aioli under a bed of arugula salad with black lava sea salt.  The Brooklyn Local 1 beer was served in wine glasses. The tart, fruity aroma was backed by a fantastic fluffy head of foam resting on the gold-colored unfiltered ale. Mr. Oliver stood up and told us how he bottle conditions the beer using an unusual refermentation process. In a typical beer, the same yeast used in primary fermenbation is re-activated for bottle conditioning. For the Local 1, Garrett pitches a second strain of yeast to condition and carbonate the beer. Extravagant! 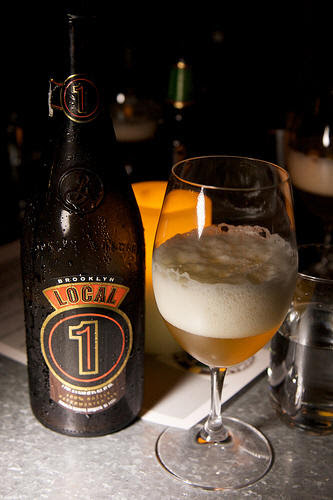 A table-mate, Justin Kasulka, described the tuna carpaccio as "A bite of delicious." I don't have better words. The tuna possessed a smooth texture and creamy flavor which complemented the sweet and fruity flavors of the Local 1. To keep it interesting, the arugula and black lava salt offered crunchy textures and a touch of salty with bitter adding a little complexity.  Sadly, the sun set before this dish was delivered. I'm not sure that most people were able to appreciate how colorful this dish was. The fresh green arugula on the raw pink of the tuna looked nearly as delicious at the taste. 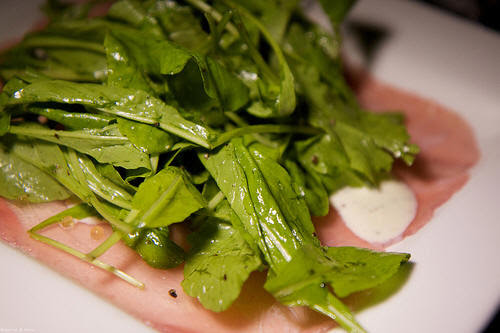 The third course, orecchiette carbonara with guanciale (cured pork jowl) and Texas quail egg yolk, came paired with the Brooklyn Local 2. The Local 2 features two interesting ingredients: caramelized Belgian syrup and raw wildflower honey. Garrett informed us that he uses 120 pounds of honey per batch of Local 2. All of the honey ferments out to feed the yeast, which must make it incredibly happy.  The Local 2 has a lovely dark color and a decent head of foam. It is lightly hopped, sticking to the malty end of the beer spectrum. The flavors were warm, sweet, and a hint of dark bitterness. I would describe its consistency as thick and sticky. 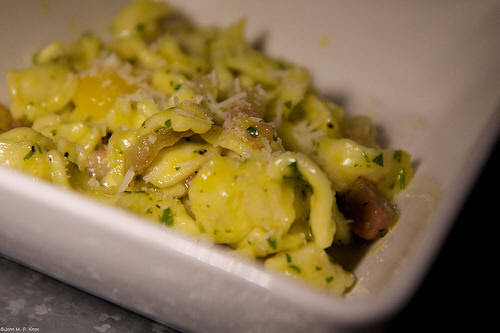 I enjoyed the pairing of the orecchiette and guanciale with Local 2, but it didn't quite live up to the earlier pairings. The dish and the beer tasted fantastic, but the combination didn't explode in my mouth like the East India Pale Ale with the Oysters Diablo. I'm not complaining though, it might be a lower cloud, but I was still in heaven. 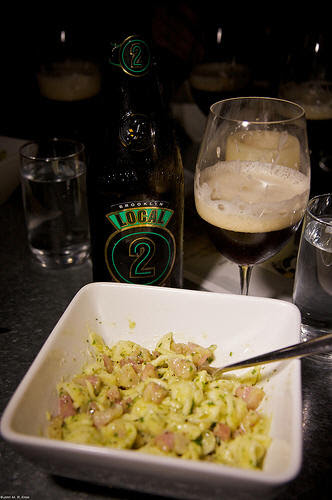 The fourth course was South Texas antelope petite filet au poivre with apricot demi, feta cheese, and smashed potatoes. This was paired with the Brooklyn brown ale. The ale produced spicy caramel flavors to counter the antelope's gamey and peppery flavors. In fact, I found the Brown Ale spicier than the antelope, probably owing to the antelope's fantastic apricot demi-glace. The spice of the beer complemented the sweet and spicy flavor of the dish, a glorious combination.

Like the carpaccio, I found the plating of the antelope notable. An otherwise boring brown meal of meat and potatoes was rescued by the addition of colorful apricots and bright feta cheese. I also appreciate that some thought was given to the details: the antelope was placed atop the potatoes and the feta finally sprinkled on top. Despite the sea of delicious sauce, nothing was soggy. The dish must have been freshly plated. 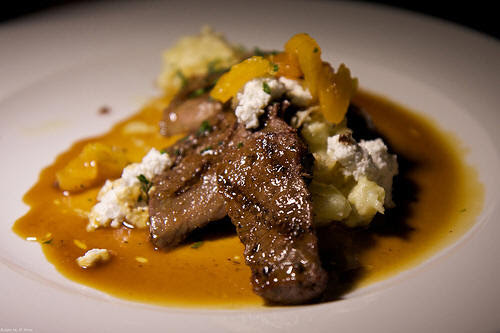 For the final course, we were presented with dessert. Unlike the previous courses, this dish actually boldly combined the beer with the food. This was a Brooklyn Chocolate Stout Float. What floated in the stout? Créme fraiche ice cream. In addition to the float, dishes of candied beer nuts were placed on the table. 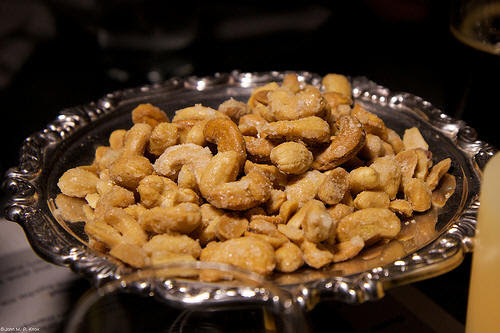 The Stout Float was an unusual concoction. The sweet and creamy ice cream floated in the sharp and bitter dark chocolate beer. Despite the name of the beer and the chocolate-like flavor, this beer (and most non "double chocolate" stouts) contains no actual chocolate. The flavors entirely come from the use of roasted malts; they most closely resemble the flavors of a dark chocolate with a high cocoa content.

I felt that the dish was more fascinating than delicious. The combination created an abundance of bitter and creamy tastes which, while flavorful, seemed to obscure the complexity of the beer. I would have preferred the ice cream served on the side. In the interest of full disclosure, I'll confess that I usually prefer other desserts over ice cream. Someone who craves ice cream floats might have felt differently. Again, the pairing was good, but I felt the direct application of ice cream to the beer cheated me out of the complexity of the beer's flavor.  The candied beer nuts worked wonders with the float. The salty and sweet nuts both complemented and contrasted with the bittersweet float. I found the combination quite addictive. 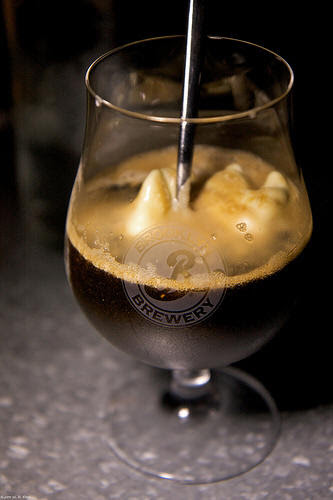 I'll remember this night as setting a high bar for beer pairings. Certainly the oysters diablo with the East India Pale Ale and tuna carpaccio paired with Local 1 both get gold medals from me.  I have experienced some good pairings at the Great American Beer Festival, but tasting a bite of food with an ounce of beer hardly compares to entire dishes and meals mated to full glasses of beer. To really get an appreciation of a dish with its beer pairing you need time and enough food to contemplate the interaction. After five courses, you will understand the harmony of beer and food.

I'm serious about the pairings spoiling my appreciation of ordinary meals. I find it difficult to eat anywhere and not contemplate what beer might go well with my meal. I feel despondent when faced with a restaurant stocked with only yellow fizzy lagers or wines. To understand my problem, you really need to try a beer pairing event for yourself. Just don't say that I didn't warn you.

Posted by PookieSoup at 7:22 AM