The Evolutionary Psychology of Online Trolls

Ever wonder why some people are so mean online?  One might argue that people are inherently evil and that being anonymous online without having to physically face others gives them the ability to engage in rude behavior.  That's a classic social psychological phenomenon.  When people are anonymous, they engage in behavior that they normally wouldn't.  Common examples I use in class are the Ku Klux Klan.  This group masked their identities and committed horrible crimes.  Do you think that those Ku Klux Klan members would have committed those crimes if their faces were exposed?  I'm going to guess not.  This begs the question of transparency now.  Why are people who do reveal their identities still big jerks on the internet?   Why do some people make "hate" for the sake of hating something a sport? 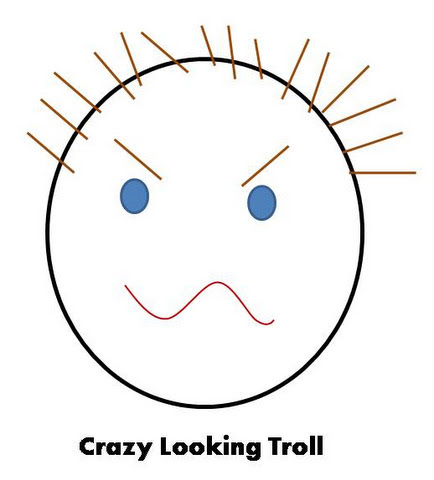 My hunch is that this is because we aren't evolved to life in large groups.  Our brains were evolved to live peacefully (relatively) in fairly small groups.  Most anthropologists and psychologists I know use ~200 as rough estimate by looking at historical data and examining tribal groups today.  We're not evolved to live in groups of 1,000,000,000,000 or whatever size city you happen to reside.  Our brains just don't work that way.  It is difficult to try to get with that many people.  Rarely will I say this, but thank goodness for a larger infrastructure (government) that keeps us relatively well-behaved and functional.

Pre-1995, social groups were still relatively small.  Enter the internet into that situation, and now we're talking about a different story.  Online groups started on listservs, irc chat, and even *gasp* Yahoo groups.  Now that we have Facebook, Twitter, and a plethora of other social networking sites, our social networks can be gigantic.  I'm making no distinction between online and offline social networks as both are equally real and valid to me. 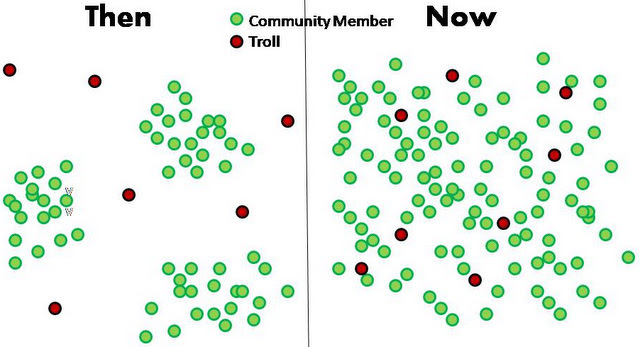 We now have a situation.  We have brains that are evolved to peacefully live with about 200 people, yet we are in contact with hundred and thousands of new people every day.  It doesn't take an anthropologist to see why our brains might have a meltdown and why some people misbehave.  This perspective certainly doesn't jive well with mainstream views in social media.  Social media takes on the perspective that we should have bigger and stronger social networks.  HUGE social networks of people are what is important to personal brands and product brands.  However, this perspective is not how our brains are designed to function.

1. The ability to post your opinion in the form of an update, tweet, blog post, or video is a great tool that I love.  I can put my opinion out there for everyone to see.  However, the ability to post anything and everything can lead to an over inflated sense of self-importance.  Some people think that just because they posted something on the Internet, that makes them right (correct) or worse, important.  Your opinion is like your rectum.  Everyone has one.  Even @MouseTheDog has one, that doesn't mean is opinion is correct or important.

2. Sometimes those people post mean things just to start a riot (online or offline).  I call them trolls.  These are the people to inject themselves into online exchanges (in which they are not invited) simply for the sake of causing a disturbance.  These trolls are the cancer of online communities.  I had a student who told me he frequently did this just to see how upset people get.  There are many of these types of people who say terrible rude things to others via Twitter, just for the sake of attention on themselves.  I used to have a friend who would tell me outrageous drama just to make me or others feel bad.  He reveled in starting drama, causing fights, and most of all, being in the center of it.  Some people troll offline too!  There are theories on what factors or mental disorders (narcissistic personality disorder) can lead to these behaviors, but I'm not going to talk about them in this post.

3. While it is difficult to ignore these trolls, you have to realize that in an ancestral environment, you might have never had contact with that jerk.  If that jerk was in your group of 200, he or she would not be welcome for very long.  The best thing to do from an evolutionary perspective is to block that jerk.

4. Conflict is inevitable in large groups.  While it is sometimes possible to get along with people in smaller groups, conflict is inevitable.  I'm in some very supportive and wonderful communities where dissatisfaction and conflict is very, very, very far and few between.  However, once you start adding more people in those groups, conflicts will arise, and they may be ugly.  This can be a great source of distress to some people as balance in attitude and sentiment is really important to some people.  You can read up more on balance theory or cognitive dissonance.  I admit that I used to find it distressing when people were fighting.  Now that I've served on at least 20 boards over 30 some odd organizations, I'm pretty okay with conflict in groups.  It will happen, and when it does, I'm not the one who is distressed.  I've been told that I have high tolerance for conflict and frustration.  Others say it seems like I don't care.  It is simply that I view it has part of psychology.  Conflict in larger groups will happen, and that doesn't mean that people are right or wrong for it.  It just happens.  Business should just move on.

5. Do you have to be friendly to everyone?  Absolutely not!  Apple is not necessarily a friendly brand.  RIP Steve Jobs.  They market to their followers, and they alienate all others.  Dr. Youngme Moon has a section on them in her book, Different.  I highly, highly recommend the book.  *I got a copy free from the Business of Software Conference.*  Mainstream marketers and even customers balk at Apple's attitudes and methods.  However, it makes complete sense to me from an evolutionary perspective.  Apple doesn't have to get along with everyone.  Apple doesn't have to like everyone.  However, Apple does a really darn good job of eliciting loyalty from their fans.  Apple gets along with their smaller (you might be thinking smaller than what!) network, and that has paid off for them.  They've decided that their fans are their *ancestral* social networks.  And they ignore anyone who isn't in that network, much like we ought to ignore people who aren't in our networks.

The take away message from this post is: We don't all have to get along.  We're not developed to get along with everyone, and that's okay.  If some random troll (online or offline) tries to start drama with you, it is okay to ignore him/her.  It isn't your problem that the troll has issues.
Posted by PookieSoup at 10:28 AM