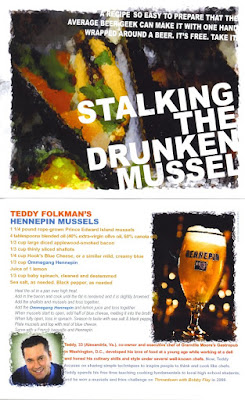 I had the great pleasure of having a front row seat to the food and beer session presented by Carolyn Smagalski, Teddy Folkman, and Phil Leinhart.  You might have seen Teddy Folkman on the Food Network as a Bobby Flay Slayer.  :o) I've included the recipe card, photos, and I can attest that the mussels were quite tasty.  Click on the recipe card for a larger version.

As you can see, the session was pretty fun and exciting.  Oil, cheese, beer, and shallots went flying over the stage.  This dish was prepared with a Ommegang Hennepin Farmhouse Saison, a spicy, gingery, and citrusy saison.  Perfectly paired with the blue cheese and bacon in the drunken mussel dish, those on the audience were in for tasty treat and showy entertainment.  Just check out the cool pictures below, there are worth several thousand words.  Photos by John Knox.

In addition to serving up some deliciously drunken mussels, Teddy was also kind enough to share the secrets to his famous french fries.  First, soak the cut potatoes in water overnight.  Teddy says that this gets the potatoes to swell and cook quickly on the inside.  I think that's what he said anyways.  It makes sense as the water inside would heat up and steam the insides.  Then blanche the potatoes in hot peanut oil at 220 degrees for just a few minutes.  Then fry again at 375 until crispy.  I'll have to try that method.

Posted by PookieSoup at 9:27 PM