Sticky Beer buns - these actually contain no beer, just beer components. Thanks to the JB @AustinHomeBrew for selling me the ingredients. I got to eat barley. I LOVE me some malted barley. I didn't really have an inspiration for this recipe. I just woke up one day with the idea beer and breakfast, then came the sticky beer buns. 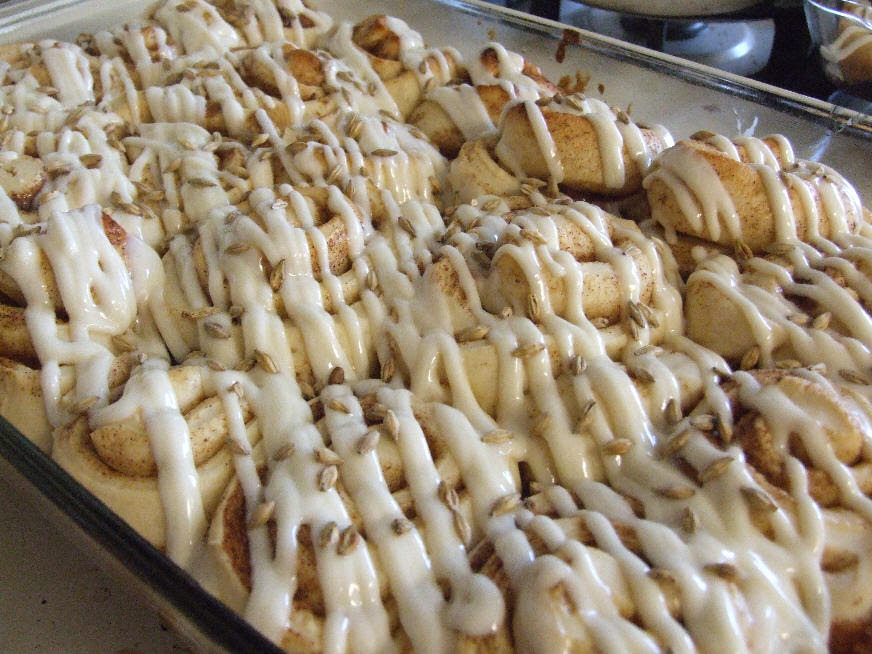 Warm milk and butter in glass measuring cup in the microwave or the stove top to 120°F to 130°F. Be very precise on the temperature as it is important to get the yeast activated. Too hot will kill the yeast. Pour into bowl of stand mixer fitted with paddle attachment. Add 1 cup flour, sugar, malt extract, egg, yeast, and salt. Mix for 3 minutes, occasionally to scrape down sides of bowl. Add the remaining flour. Stir on low until flour is absorbed and dough is sticky, scraping down sides of bowl. The dough will get tougher and tougher for the mixer to move. If dough is very sticky, add more flour by tablespoonfuls until dough begins to form ball and pulls away from sides of bowl. Turn dough out onto lightly floured work surface. Knead until smooth and elastic, adding more flour if sticky, about 8 minutes. Form into ball.

Lightly oil large bowl with nonstick spray. Transfer dough to bowl, turning to coat. Cover bowl with plastic wrap, then kitchen towel. Let dough rise in warm draft-free area until doubled in volume, about 2 hours. If it is larger than double, that's okay, just punch it down more on the next step.

Mix malt, butter, and cinnamon in a small pot over a flame until smooth. Do this while the dough is rising and allow to cool.

Combine cream cheese, powdered sugar, butter, and Kahlua in medium bowl. Using electric mixer, beat until it comes together. You made use more Kahlua if you like. This is the same frosting I use on my coffee porter cupcakes and my Kahlua chocolate almond cupcake.

Punch down dough. Transfer to floured work surface. Roll out to 15×11-inch rectangle. Coat top layer with the filling leaving 1/2-inch border. Starting at 1 long side, roll dough into log, pinching gently to keep it rolled up. With seam side down, cut dough crosswise with thin sharp knife into 1/2 inch to 3/4 inch wide pieces. It should make 18-20 pieces. I typically cut just a few pieces at a time then place into the pan. The filling is unlike the filling of traditional cinnamon rolls. This one is very sloppy and will start oozing all over the place. Cut quickly, and move fast. If there is extra cinnamon filling all over the counter top, I just drizzle it over the top of the sticky buns.

Spray a large 9x13 inch square glass baking dishes with nonstick spray. Divide rolls between baking dishes, arranging cut side up (there will be almost no space between rolls). Cover baking dishes with plastic wrap, then kitchen towel. Let dough rise in warm draft-free area until almost doubled in volume, 40 to 45 minutes.

Position rack at the top of oven and preheat to 375°F. Bake rolls until tops are golden, about 20 minutes. Watch the bottom of the pan as the malt extract filling will turn burn rapidly. As soon as it is turning brown and oozing from the sticky buns, it is about to burn. Remove from oven and apply the frosting while hot. You may use a knife or spoon to apply the frosting. I personally use a small round piping tip and crisscross the entire pan in one swoop. The frosting will melt right over the buns and create a glorious malty mess. Sprinkle the malted barley over the top and devour. These may be frozen once they are baked, but I would not advise one to freeze the raw dough. 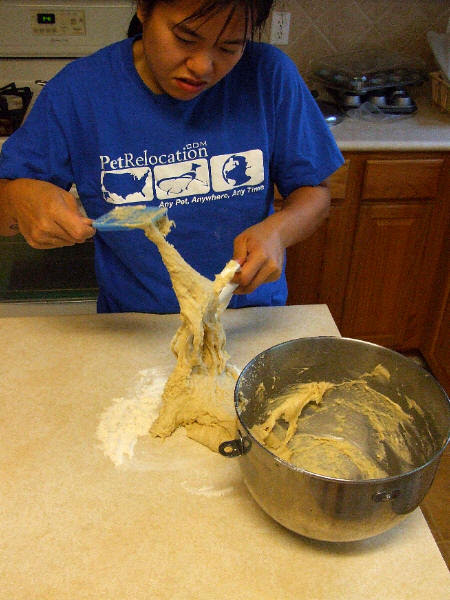 I'm not sure why I look so unhappy.Probably cuz it was very early in the morning. 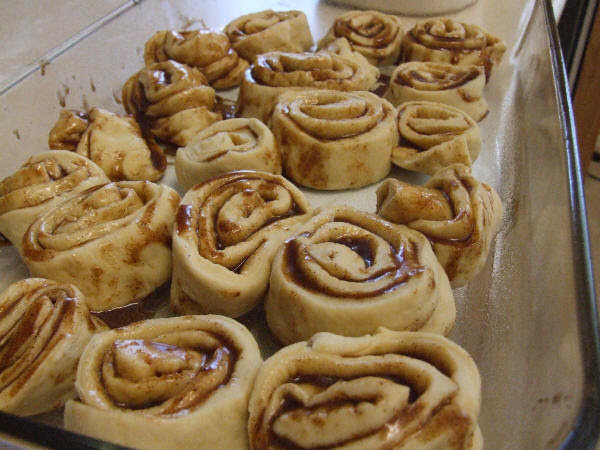 Right after rolling and cutting. This is a very messy process. 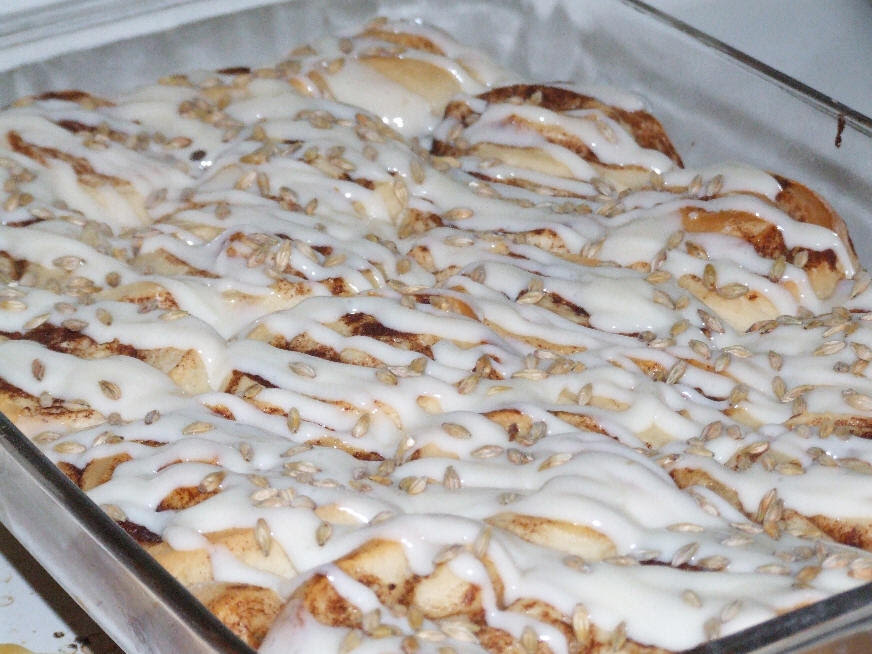 Frosted and topped with malted barley.

Posted by PookieSoup at 3:18 PM