What makes up a community?  According to dictionary definitions, it is a social group.  Many of the factors that tie this social group together are location or common heritage.  It can also be a group of people or nations sharing a common interest.  And online interest community is typically comprised of people with a shared interest (knitting, reading, eating, cooking, gardening, etc...).  These communities not only have a shared interest, but they usually have shared behaviors (engaging in behaviors as well as how they interact).   Being an active member of over 20 different clubs and communities over the last few years, each community has it's own culture and social rules.

I've been in the craft beer community for almost two years now, and I have to say that it is a pretty awesome group.  While there are different types of beer drinkers, I'm referring to the passionate group of beer evangelists who know and love craft beer (denoted in the blue and purple circles).  These people might write blogs, organize local beer events, work in a craft brewery or craft beer organization, or participate heavily in homebrew activities.  The shared interest is the promotion of craft beer, and how they interact is extremely friendly.

This core group of craft beer enthusiasts are extremely dedicated to producing quality beer (commercially or at home), share the same philosophy, and are really nice.  No, really.  They are really cool, chill, friendly, and awesome.  You might think that it is just a front, but it is not.  Even in a heavily drunken state, craft beer enthusiasts are really, really nice. At the Great American Beer Festival Media lunch in 2010, Paul Philippon of Duck Rabbit (and I quote) said "the national brewing community is a$$hole-free."  The general rule for this group (denoted by the purple and blue circles) is the 99% rule.  99% of craft beer enthusiasts are really awesome, and only 1% is a total !#%%#$!er.  It wasn't until recently that I met someone in that 1% that I got to thinking more about defining community. 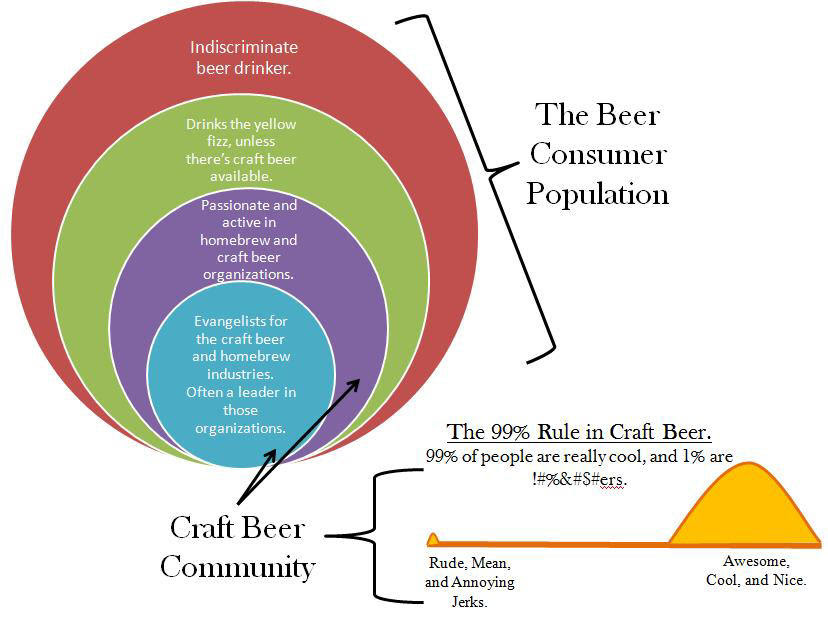 It started about two weeks ago when I was looking for a graphic designer to do some work for my new project, Thirsty Bird Threads.  Graphic designer, we'll call him Mr. 1% for now, contacted me with the slant that he was heavily involved in the beer community.  He claimed to be friends with brewers at a Texas brewery, a home brewer, had beer brands as past clients, and 18 years of experience. He also offered me a very low rate of $125 per logo as he was hungry for some referrals and work.  I took Mr. 1% up on that offer because of his past work experience and to support another fellow craft beer lover.  Turned out Mr. 1% probably deserves an ejection from the craft beer community.  Among many of the offenses he committed, these are just a few.
Well, he surely stuck out as a 1%.  He wasn't just un-cool, he was a total #$#@%er.  This leaves several questions concerning community.

Women on the Great American Beer Festival Media Bus Tour. Ginger Johnson of Women Enjoying Beer on the left and Chelly Vitry on the right. Photo by John M. P. Knox.
Can you be a member of a community while only engaging in some activities?
I do consider myself a member of the craft beer community, but I don't engage in all of the activities surrounding the craft beer community.  One of the more common activities is homebrewing.  @Windaddict does that already, so there's really no need for multiple batches of homebrew at the same time.  Mr.1% claims that he engages the activity of homebrewing, but whether or not he shares the same craft beer attitudes and philosophy is questionable.  I would tend to say that just engaging in activities isn't enough.  One must also have the shared attitude or philosophy.
Another example of my point of view would be in the dog fancier community.  If you don't already know, I show, train, and handle dogs.  The people who put forth hours and hours of work and thousands and thousands of dollars showing and sometimes breeding dogs are called fanciers in my book.  Other terms for them are breed enthusiasts or, generically, dog show people.  These are a very special breed, pun intended, of dog lovers as they are highly invested into improving their beloved breed in structure, health, type, and temperament.  These people make up about .01% of all dog owners.  One of the activities that they engage in is breeding to improve the breed.  Nope, there's no money in breeding a litter to improve a specific breed.  Dog fanciers are losing thousands of dollars.
On the other hand, many people engage in the activity of purposely breeding dogs for other reasons.  Those other reasons might be due the desire to make money, to show kids what birth looks like, or because they don't see a reason for pet population control.  These people are NOT in the dog fancier community because they don't have the same philosophy of improving a breed's type, temperament, structure, and health.
I could write a novel about the dog community, so I'll sum it up in a phrase commonly said in the dog fancier community.  If you make money breeding dogs, you're not doing it right.  If you're not interested in spending a large fortune improving a breed, you're better off getting a dog from rescue or the shelter.
If someone's interactive behavior is completely out of line with the norm for the community, is that person even considered in the community?
Can someone be such a !#%$^@$#@ that regardless of all his other behavior, he's a pariah? I suppose the answer is sometimes yes, and sometimes no.  Kayne West was a real jerk to Taylor Swift.  But I think he's still out there doing whatever, wait.... I'm going to let you finish writing, but...  Kayne West committed a fatal mistake in my opinion.  It isn't clear whether or not he is still in the inner circles of the music community, but he appears to be doing okay with his fans despite his stunt.  I'm not in the community so I can't say for sure.
The sometimes yes part comes in when someone is so rude, abrasive, and hateful that no one wants to interact with that particular person.  While the person might still engaging in activities and share the common philosophy, being a jerk can get you ejected from a community.  If you show up to a party, and no one wants you there, you're probably not a member of the community.
These were mostly theoretical questions, and as a commercial brand, Mr.1% might be considered part of the target audience.  But I'm not sure that Mr.1% should really be considered part of the community, at least from a community perspective.  His behavior wasn't just a little unusual for the community.  His behavior was so out of line of the community norm that I can't see him lasting long where the community is extremely friendly and cohesive.
This article doesn't get into the the ins and outs of organization governed communities, industry managed communities, or self-selected participatory communities.  However,  if I managed the community, my ninjas would have taken him out a long time ago.

Some sexy Ladies of Craft Beer. By John M. P. Knox.
And because women in beer are totally awesome, I teamed up with @Snax to bring you the "MisoHungry and Austin Women’s Beer League Host Beer & Dessert Pairings."  On Sunday, Oct. 24th, 2-4 pm, at the Gingerman Downtown Austin, join us for beer flights and tasty treats.  Sponsored by Austin Cake Ball and Sugar Mama's Bakeshop.
Posted by PookieSoup at 8:09 AM