Hops and Grain and Puppies too!

Hops and Grain, owned by Jeff Russell and Josh Hare, is the newest brewery on the block in Austin.  Jester King and Circle breweries already well on their way with funding and location, Hops and Grain is one of Austin's youngest brewery in the works.  All photos by John Knox. 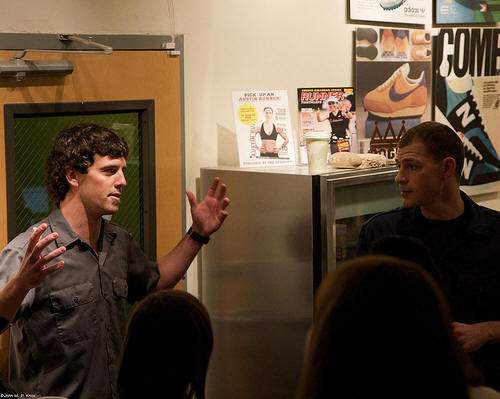 Jeff and Josh talk about their plan.
Josh started brewing at the young age of 20 years old.  In his words, " "A good friend of mine was given a homebrewing kit as a gift and had never used it.  I saw it at his house one day and after a lengthy discussion we struck a deal.  He would give me the homebrewing equipment if I would give him half of the beer that I brewed.  It was a sweet deal, he enjoyed the beer and as a poor college student I got to start brewing for free.  I was also drawn to the fact that I could purchase ingredients to make beer without being the legal age to consume it!  My first two years of brewing were simply to make beer that was drinkable.  I got bored with going through the motions and started to incorporate my passion for culinary arts and my desire for experimentation.  I made some great beers and I made some bad beers, but I learned something new each time a brewed a batch of beer.  In college I would order ingredients from Austin Homebrew, when I moved to Boulder I still ordered many of my ingredients from Austin Homebrew and right now I still buy my ingredients from Austin Homebrew. They have been a valuable resource for myself and everyone else involved the craft beer scene in Austin. 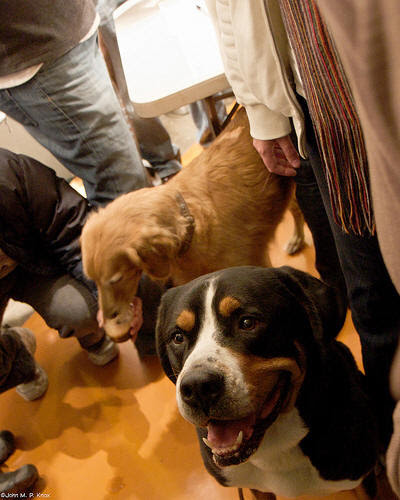 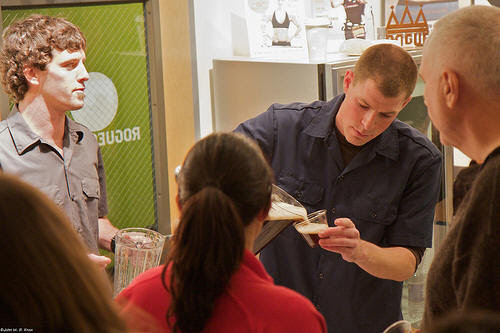 Samples are on their way.
They are planning on having four year-round beers available on tap and in cans.  Hops and Grain is very passionate about lessening their impact and creating ways to make their craft more sustainable.  By providing our beer in cans, they are offering our product in one of the most recyclable containers on the planet, reducing the weight for distributing our product and allowing active people to take our craft beer with them to places that won't allow glass.  Following are the four beers with descriptions from Josh and Jeff:
Alt- This German style ale has a very rich maltiness from hefty additions of Munich and Vienna malt.  We use a German Ale yeast but cold condition this beer like a lager to leave a crisp and dry finish.  We use only noble hop varieties for this and our Kolsch.  The lower levels of alpha acids provide a very slight bitterness that balances very well with the malty sweetness.  Our Alt is right around 5% ABV and will be a very refreshing beer all year long.
Kolsch- Another German style ale using the same strain of yeast as our Alt to provide a dry and crisp finish.  Light hop additions provide a slight citrus presence that is balanced very well by the malty sweetness. This beer has a base of German Pilsen malt with slight additions of Dextrin malt for body.  Our Kolsch is around 4.8% ABV and we plan for it to be a go to beer for trips to the river, BBQ's or any other outdoor activity that is best accompanied by a cold, refreshing craft ale.
Red Ale- This is my favorite of our four year-round offerings.  This beer has alot going on, rich caramel sweetness from hefty additions of Crystal malt.  We use Organic 2 Row for our base malt and have small additions of Munich and Dextrin malt for added complexity.  The most noticeable thing about this beer is Hops.  It smells of grapefruit from large additions of Simcoe and Amarillo hops and will be sure to quench the thirst of all those lupulin addicts out there, aka Hop Heads! Approx. 6.9% ABV
American Pale Ale- Pale in color with a pleasant malt profile and dominant hop presence.  Using mostly Centennial and Cascade hops this beer smells of pine and citrus and delivers a thirst quenching, hop infused mouth full of goodness.  Slightly less bitter than our Red Ale but every bit as malty.  This beer has a simple grain bill with mostly Organic 2 Row and light additions of Biscuit, Vienna and Dextrin malt. Approx. 5.8% ABV 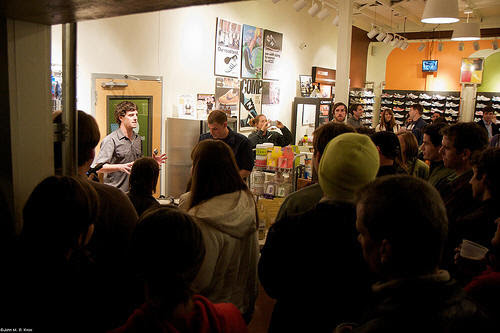 A huge crowd at their first tasting at Rogue Equipment. 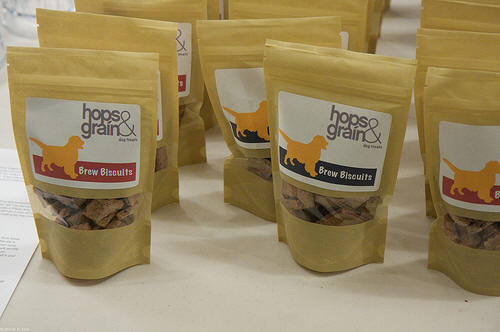 Hops and Grain also makes dog treats out of grain that previously used in brewing.  Brew biscuits available at Rogue Equipment.  Mouse loves the brew biscuits.  He ate an entire bag in about 30 seconds.
They are actively looking for investors and hope to reach their first benchmark and begin moving into a space in the Spring/Summer of 2010.
Contact:
Josh Hare
(512)914-2467
Hops and Grain Brewing
www.hopsandgrain.com
Posted by PookieSoup at 8:08 AM