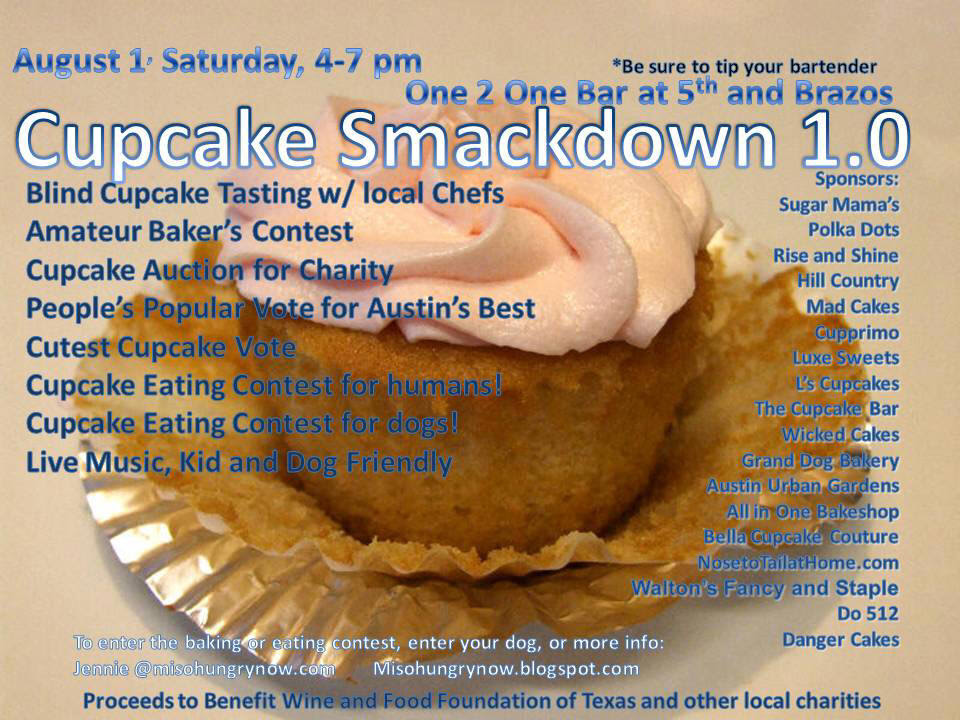 Are you ready? Get Set! and BAKE! It is time for Austin to have a Cupcake Smackdown1.0, pitting icing against icing, pitting cake against cake. we'll see whose cupcakes reign supreme. Cupcake Smackdown will be held on August 1, 4-7 pm at One-2-One Bar. The tentative activities for Cupcake Smackdown 1.0 are a blind tasting contest of all the store front bakeries, an amateur baking contest, a cupcake silent auction, the people's popular vote, and a cupcake eating contest for both dogs and humans! Live music will be performed by Arielle Nicole.

For the blind tasting, a panel of local chefs and foodies will be chowing down on vanilla, chocolate, and a baker's choice cupcake from each of the eight store front shops. Each cupcake will be judged on the flavor, texture, and aroma.

Other activities include a bake off in which amateur bakers can enter either the vanilla, chocolate, or freestyle cupcake competition. There will be two categories for the cupcake eating contest: one for human participants and one for canine participants. Canines will be eating pupcakes for speed (not quantity). Ginger carrot pupcakes provided by Grand Dog Bakery. Spectators will also be invited to vote for the People's Choice award for any of the store front bakeries, vote for the cutest cupcake at the smackdown, and also participate in a cupcake silent auction. Proceeds to go to Wine and Food Foundation of Texas.

The event is kid and dog friendly. The last day to submit entry forms for amateur bakers' class is July 22nd. Pre-entries for the cupcake eating contest are being accepted and will be accepted until the day of the event pending space. Each entry for the eating contests costs $10. Entries for the amateur baking contest is free. Entry forms for the eating contests are available at All-In-One Bakeshop on 183. Please bring water and a spray bottle to keep your dog cool. It will be hot. Admission to the event is free. Vendors will be there to sell food items. Please tip your bartender.

Email Jennie@misohungrynow.com to participate, enter yourself or your dog, enter your cupcakes, or to sponsor the event.

Here's the list of judges for Cupcake Smackdown1.0. I will be tasting, but not judging.

Jennie Chen - MisoHungryNow.com & MakeitwithMoonshine.com - Will shake my cupcakes for frosting.

Peter Tsai – FoodingBlog.com - the Foodingblog photographer \ writer with a taste for fun

Todd Duclephan – Executive Chef at Trio/Four Seasons - I could judge cupcakes in my sleep.

Phillip Speer – Pastry Chef at Uchi -Want some Uni on your cupcake?

Jodi Bart – Tasty Touring and KGSR - Has anyone invented a cupcake top?

Devrah Otten - winner of the tasting competition portion of That Takes The Cake(2008 and 2009) - Cupcake Mistress of the Delicious.

Kristen Speyer - Betty Crocker in disguise - Are you looking at my cupcakes?

Cecilia Nasti - KUT Growing Concerns - She eats from the garden and savors life (and would grow cupcakes if she could find some seeds).