It is no secret that I use liberal amounts of beer in my baking, why not use it in my baking? I recently got two whole goats from Osth Family Farm (I almost cried when they were butchered, kinda). Here's my first experiment with my babies. *Sniff Sniff* 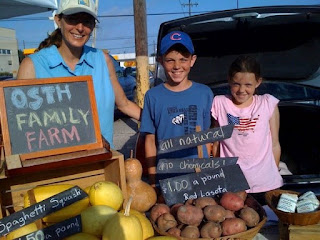 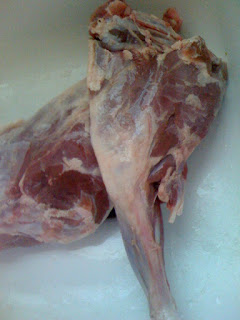 So I had problems with my lamb legs. They were much too long to fit into my dutch oven. After wacking away at the knee joint and separating the cartilage, I was able to get one leg to fit into the dutch oven flat. Rub spices into each leg and sear in the dutch oven. Use canola oil as you need a higher smoking point. I seared each side of the leg, then I had to twist them around to get both legs to fit into the dutch oven. This is where the heavy duty tongs come in handy. Once they were both in the pot, add enough beer to cover most of the goat. You can move it into the oven now at 350 degrees, but I left my dutch oven on the stove. Low rolling boil the pot covered for about an hour. You may choose to add more or less spices anything in this process. I added garlic, more cayenne, and more mint. 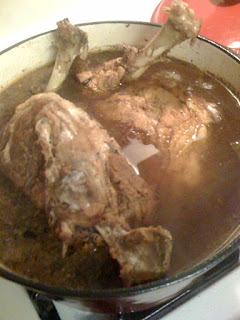 After one hour of cooking

After about an hour, the goat meat should be very tough. Don't worry, that's normal for goat meat. I had to flip the goat around as not all or it was covered in the beer. Cover and low rolling boil for another hour. After two hours, the meat should start to pucker and look as if it is falling off the bone. It will still be very tough at this point. Cook for another hour, and the meat should start to fall off the bone. The meat fell off in large chunks, but it wasn't completely tender at this point. You can add your root vegetables now. There's about an hour of cooking left. After another hour or so, your beer cabrito stew is ready. 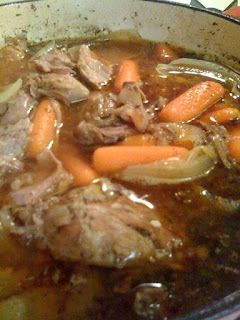 Since I used mint in mine, I'm serving it with beer and a mint chuntey (available in jars at Indian Supermarkets). It would also go well with a mint cucumber yogurt sauce. You do need the beer. A good beer. Yay for cabrito!
Posted by PookieSoup at 8:36 PM