Here's a recipe from Cecilia Nasti and one from Nate Seale.  Cecilia brought an utterly addictive Beeramisu make with Great Divide Yeti.  One thing I have to say about Cecilia is that anytime people hear her name, they ask me, "You know THE Cecilia Nasti?"  Nate Seale is (512) Brewing's very talented brewer.  Below is his recipe for Beer Tiramisu.  :o)  Enjoy! 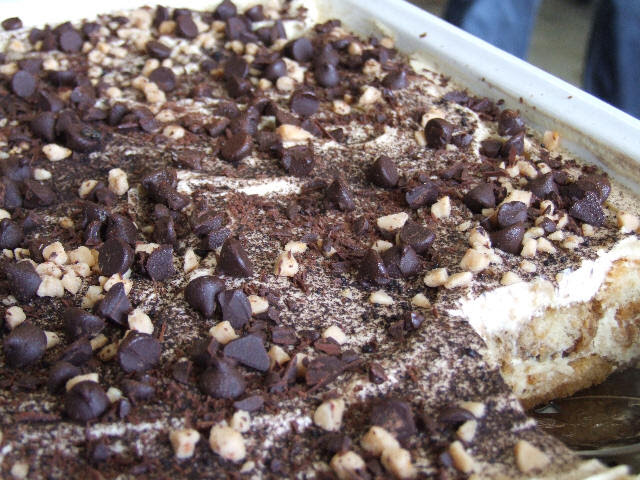 4. Working one at a time, quickly dip and remove ladyfingers into the coffee beer mixture (just a fraction of a second will do it), then create a single layer on the bottom of a 13 by 9-inch glass or ceramic baking dish.

5. Spread half of mascarpone mixture over ladyfingers; use rubber spatula to spread mixture to sides and into corners of dish and smooth surface. Place cocoa in fine-mesh strainer and dust cocoa over mascarpone.

6. Repeat dipping and arrangement of ladyfingers; spread remaining mascarpone mixture over ladyfingers and dust with more cocoa. Wipe edges of dish with dry paper towel. Cover with plastic wrap and refrigerate 6 to 24 hours. Sprinkle with grated chocolate or chips and toffee bits; cut into pieces and serve chilled.

This Beer tiramisu recipes comes from none other than great brewer at (512) Brewery, Nate Seale.  I've taken some liberties in formatting the recipe, and I added Irish Cream.
Beer Tiramisu

A large wine glass or goblet

-Whip the mascarpone together in a food processor with the powdered sugar, then drizzle in some Irish cream until it’s thick but easily spoonable. You could add some vanilla or something at this point too if you want.


-Break a couple of the ladyfingers in half and dip them in the espresso or beer. Try not to get them super soaked or they’ll leak inside the glass. Then place them in the bottom of the glass.

-Drizzle some chocolate syrup over the ladyfingers. If you get a little crazy and get some on the inside walls of the glass, that looks cool too.

-Spoon some of the mascarpone cream over the stuff in the glass and kind of level it out. It may work better to sort of tap the glass on the counter to make it settle rather than using a spoon.

-Sprinkle some ground cinnamon over the mascarpone. Be careful, it can look kind of crappy if it smears on the glass.

Ideally, this should about half fill the glass. Repeat the whole process to make a second layer, then grate some orange zest over the top. And voila!