Justine's: A lesson in service

I've been wanting to try Justine's Brasserie 4710 E. 5th street for the longest time.  I was pretty stoked that a group of friends had made plans to check out this new Austin restaurant.  Unfortunately, it was not the experience we expected.  The evening started out bumpy, and it just got worse and worse.  I did inform the owner of the mistakes before I left.  He was apologetic, but I think the rest of the party had had enough.  Sorry, there are only two photos for this post.  That's all we got along with some bread. 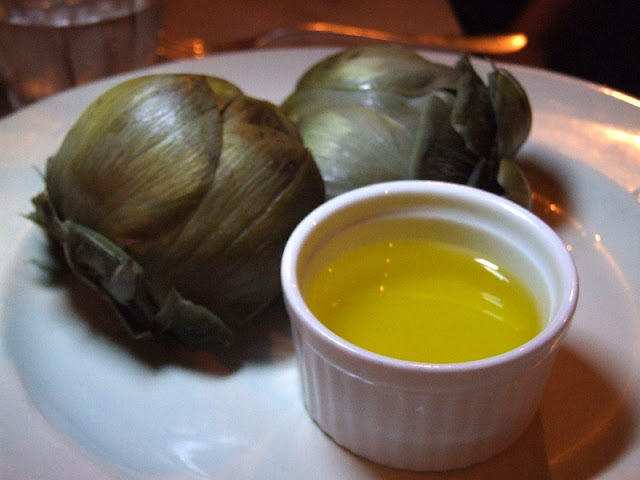 Fail One: Do we or do we not have a reservation?   I arrived at 7:30 to meet some friends, and I was told that even though we had a reservation, we don't.  Apparently, they don't take reservations for more than one party of six, and there was already one reservation for a party of six.  I'm really confused at this point.  My friend, Michelle, had made the reservation knowing that a typical wait would be two hours or more.  Someone could have told her that there would not be a table for us even though there was a six top table set up and waiting (not for us though).  The hostess did tell us that we would have the next table that was big enough for a party of six and pointed to two tables in the corner.  We watched as the table was cleaned and pushed together.  Then we watched as the hostess seated another party at that said table while the first six top table remained open.  We were seated at a tiny, barely big enough for four table squished near the door at 8:05 pm.  All the while, the original six top table remained open until 8:20pm.  We were later told that the other reservation of six failed to show up so they gave the table away to a walk up. 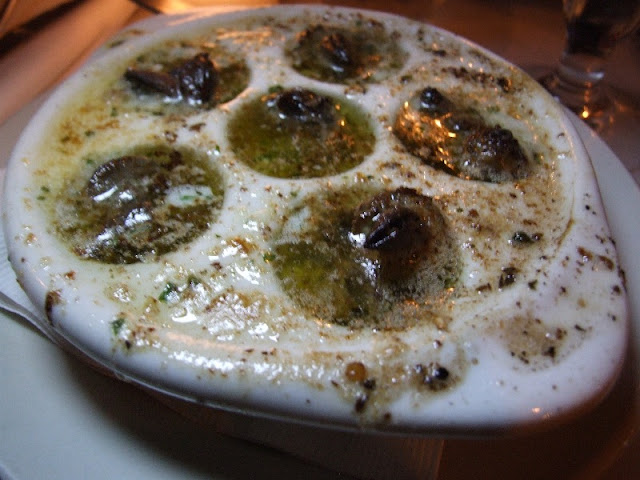 Fail Two: Should the waitress repeatedly run into seated patrons?  Having six seated at the tiny table was miserable.  I was placed on the end, and our waitress would run into me repeatedly.  I'm not talking about brushing by.  She would ram into my chair and bump me.  It was so rough that I held my camera in my lap so it wouldn't get knocked to the floor and damaged.

Fail Three: How long does it take to pour a warm beer? After ten minutes, our drink orders were taken.  One bottle of wine, two cocktails, and a beer took 20 minutes to be delivered.  The waitress was not knowledgeable about the beers, and simply told me it was a "lager."  I think it was Brooklyn Brewery's Lager, though it was served in a Stella Artois glass.  Brooklyn's Lager should be served at a temperature of 39-43° F, but this beer was barely chilled, tasting slightly cooler than room temperature.  When the wine came, the waitress poured a taste for one person at the table, then left abruptly.  She didn't even wait for the taster's verdict.

Fail Four: Why is personal mail being used to take orders, and why did it take 15 minutes for her to place the order?  15 minutes after our waitress took our order, she came back to inform us that she had written it on her electric bill, and that her writing was so messy that she couldn't make out what she had written.  Why she waited 15 minutes later to order our food was questionable, but why she wrote it on her personal electric bill was even more questionable.

Fail Five: How many appetizers did you order?  I'll forget to order yours.  About 30 minutes passed, and the table was presented with two of the three appetizers - the steamed artichokes (2 whole) and the leek & potato soup.  The artichokes were shared around the table as we waited. We worked on our second basket of bread with the over salted olive oil.  After another 20 minutes, we inquired about the escargot that I had ordered for the table.  The waitress insisted that they were coming out.  Instead of going to the kitchen to get them, she went to the computer to place the order for them.

Fail Six: Is it two artichokes or half an artichoke per order?  As we were waiting, the waitresses behind me were cleaning up some sort of mess on the floor with Windex.  Two of them collided, and artichokes went all over the floor.  Some questionable cleaning (looks like they were spreading salt or some other granulated substance thinly on the the floor) went on, and one waitress came out, looked confused, turned to our table, and offered us the plate of artichokes.  We got the feeling that she forgot which table ordered it so it was easier just to give it to us.  We took the plate only to discover that it was only half an artichoke and a pile of artichoke leaves arranged to look like another artichoke.  I was wondering if they had intentions on sending that as a full order, because it seemed to be lacking one and a half artichokes.  Also, Michelle is still waiting after 45 minutes for the second cocktail she ordered.

It was now 9:30pm.  The table of six that was seated at 8:20pm was already finished with dessert.  The couple behind us who were seated later than we were had already paid their bills and were about to leave.  That nice couple also offered us some of their fries.  I see the owner, and I ask if we could pay our bills and leave.  He comps our drinks and appetizers, and he apologizes.  The waitress looks shocked that we were unhappy.  She explains that sometimes the kitchen just gets backed up.

I find that attitude to be unacceptable.  She simply did not put in our orders when we placed them.  She was forgetful with the beverages.  If the kitchen was backed up, then everyone's food would have been stalled, but this was not the case.  This type of service is in sharp contrast to the type of service I usually experience.  I just have to say that I left Justine's Brasserie very frustrated, hungry, and tired.  For dinner, I got a McDonald's ice cream cone.

I gave the owner, Pierre, my card.  I hope that he reads this post because it wasn't just the wait for food that was bothersome.  A lengthy wait (even with reservations) can be overlooked if the service and food was fantastic.  The experience from start to finish was problematic.  Reservations should have been honored.  My beer should not have been warm.  Food orders should be placed soon after they are taken, not after 15 minutes.  It is a shame for a popular restaurant to have such atrocious service issues.

Here's a helpful link for those in the restaurant biz: http://boss.blogs.nytimes.com/2009/10/29/one-hundred-things-restaurant-staffers-should-never-do-part-one/

Here's a helpful video with great tips:  http://www.openforum.com/idea-hub/topics/managing/video/small-business-rules-the-fish-stinks-from-the-head-the-myriad-rule
Posted by PookieSoup at 10:25 AM